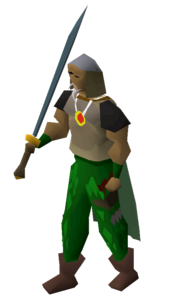 A ranged-melee hybrid is a type of free-to-play combat pure account that combines ranged and melee combat styles. It is one of the most common free-to-play builds that dominates the 1-vs-1 player-versus-player combat scene.

attack up to 40 to gain access to the rune weapons. This can be further increased up to 49 without affecting the overall combat level when 99 ranged level is reached.

On low combat levels, these pures might choose not to train attack, and rely on the rune warhammer instead as the melee switch weapon since it only has a strength requirement. See the variants section for more details.

Ranged-melee hybrids typically wear leather armour of the highest available tier along with an amulet of strength or an amulet of power. Iron chainbody can be used instead of leather body for slightly better defensive bonuses, but it mostly comes down to aesthetic preference as the bonuses are rather small either way.

Monk robes can be worn to slow down the prayer consumption.

These pures use a shortbow of the highest available tier along with a strong melee weapon switch such as a two-handed sword. Some also bring a scimitar for a quicker secondary melee weapon, or use a battleaxe instead of a 2h sword for a shorter delay after knockout attacks. On lower combat levels, warhammers can be used as the knockout weapons instead, as they have no attack requirements. In particular, rune warhammers with a requirement of 40 strength can typically be used before unlocking stronger rune weapons.

For multi-combat and deep wilderness scenarios, many pure use wizard robes, zamorak monk bottom, leather vambraces and an amulet of power to increase accuracy of utility spells such as Snare or Tele Block.

Ranged-melee hybrids typically train attack only high enough to unlock certain tiers of weapons such as rune. After reaching 40 attack level and unlocking rune weapons, most free-to-play pures no longer train this skill until reaching 99 strength level. It is worth noting that with 99 ranged level, attack can be trained up to around 50 level without increasing the overall combat level.

Strength and ranged can be trained with members-only methods to avoid gaining hitpoints experience.

Magic can be trained without affecting the combat level with methods that do not grant any hitpoints experience. While magic is not used offensively in typical 1-vs-1 combat, it is still worth training as it improves magic defence and grants access to utility spells such as teleports, Snare and Tele Block. It is also useful against armoured opponents in the deep wilderness. As a rule of thumb, magic can be kept on the same level as ranged without affecting the combat level.

Ranged-melee hybrids use quick ranged attacks to wear the opponents down and melee attacks to knock them out. Their combat core technique is called stacking. The goal is to switch to a melee weapon shortly after a shot, attack the opponent, and stack both hitsplats at the same time. This allows the pures to deal a lot more damage in a single game tick, before the opponent can react.

To improve the chances of performing a successful combo, the players can use techniques such as delaying, backstepping or sliding. Delaying is particularly important, as it makes the switches less predictable. The goal of a successful delay is to switch to a melee weapon in the last possible tick after a ranged attack, so that the opponent cannot react to the switch.

Many pures use an additional magic switch in the deep wilderness to maximize damage output on armoured opponents, as well as to use utility spells such as Snare or Tele Block.

Scimitars are often used instead of slow knockout weapons, as they provide better damage-per-second rates overall. 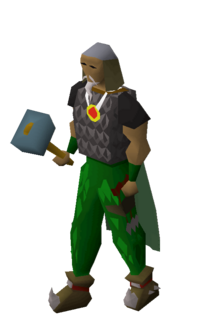 On early combat levels, following a strength pure build allows to achieve higher maximum melee hits thanks to the access to the rune warhammer.

Accounts focused on typical arranged 1-vs-1 duels often have either 13 or 31 prayer levels to access Superhuman Strength or Ultimate Strength respectively. High level pures or players that participate in multi-combat or deep wilderness fights commonly train prayer up 44 to access the protection prayers and the Eagle Eye prayer.

Many ranged-melee hybrids choose to also train magic in order to improve magic defence and gain access to utility spells such as Snare and Tele Block. While underused and largely ineffective in typical 1-vs-1 combat, magic is very useful in the deep wilderness.

On lower combat levels, these pures might favor strength over attack similarly to strength pures. 40 strength gives access to the rune warhammer, which is an excellent knockout weapon without an attack requirement with similar bonuses to the rune battleaxe. As such, ranged-melee pures can follow the strength pure build early on, and use a combination of a shortbow and a warhammer in combat.

On higher combat levels, the maximum melee hit advantage of strength pures becomes less drastic, and their low accuracy tends to make it difficult to face opponents that train defence. Additionally, even with 99 strength and 1 attack, the ranged skill can only be trained up to 67 level without affecting the overall combat level. Once the ranged level is over 67, attack should be trained either way to make the account optimal within the given combat level bracket. This makes the ranged-melee pures a natural progression of strength pures that use ranged attacks, as they might choose to gradually train attack to gain access to better rune weapons, and to increase their accuracy against armoured opponents.

A maxed ranged-melee hybrid at 78 combat level can use all combat styles effectively. Such an account is typically the end goal of free-to-play pures. Training attack past 50 and prayer past 45 has relatively small benefits on free-to-play worlds at the cost of gaining extra combat levels.

However, some players might eventually choose to train defence. Doing the Dragon Slayer I quest and training defence up to 40 allows to convert these accounts into rune pures. These are also very effective in free-to-play player-versus-player combat, particularly in the higher combat level brackets.