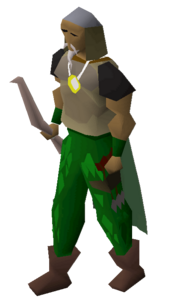 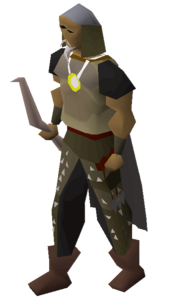 A ranged pure is a type of free-to-play combat pure account that focuses on training ranged.

On free-to-play worlds there are no ranged-based knockout weapons such as the ballistae or high tier crossbows. Because of that, ranged pures are considered ineffective in typical arranged 1-vs-1 player-versus-player combat, and are pretty rare in general. However, they do find some use in multicombat areas due to their high damage output.

In contrary to pures using melee with a rune scimitar, ranged pures can engage in ragging without access to the Protect Item prayer due to how cheap maple shortbow is. When 1-itemming with access to the item protection prayer, they can also bring an amulet of power, green d'hide chaps or green d'hide vambraces to improve the ranged accuracy bonus.

In some cases, maple longbow or willow comp bow might be used for their longer maximum ranges.

Members-only training methods that do not grant hitpoints experience such as cannoning can be used in order to minimize the combat level.

While it is possible to stack ranged hits by running closer to the opponents, this method is rather ineffective compared to ranged-to-melee combos.

Ranged pures typically use the best available shortbow set to the rapid attack style in order to maximize ranged damage. Keep in mind that while they can deal a lot of damage at a distance, they lack the flexibility and versatility of pures that use all combat styles.

Ranged pures are sometimes used in locations such as north of Edgeville or the Ferox Enclave to rag other players. They will typically only carry a maple shortbow with a couple of adamant arrows and no food, allowing them to skull up without risking valuable items and fight to the death. In contrary to melee pures, ranged pures can also use cheap wines to heal without any effect on damage output.

44 prayer level is necessary to maximize ranged damage with the Eagle Eye prayer. It also grants access to the protection prayers. Otherwise, prayer might not be trained at all to limit the overall combat level.

By training melee combat skills, ranged pures can be easily converted to ranged-melee pures which are much more successful in typical 1-vs-1 combat.