From Old School RuneScape Wiki
(Redirected from Ranged strength)
Jump to: navigation, search
The RuneScape Wiki also has an article on: rsw:Ranged Strength 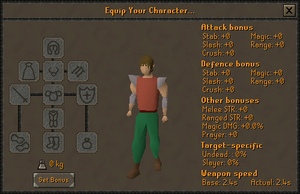 Ranged Strength is one of the Equipment Stats. As of 31 July 2014, Ranged Strength is shown on the equipment screen. This article is intended to remove confusion as to which ammunition deals more damage. One example is iron bolts versus bone bolts; the Ranged Strength stat shows that bone bolts are better, even though their level requirement for use is lower.

Below are the ranged bonuses of ammunition. Note that damage is also affected by the speed of the weapon used. Rune knives deal damage very quickly, despite having a max hit of less than 20 damage. For this reason, most ranged weapons are better used in rapid stance. Accurate stance will deal more damage per hit, but it is not worth the decreased speed. If accuracy is needed, a slower weapon such as a crossbow will provide the needed improvement, while dealing more damage to compensate for its slower speed.

Because cannonballs are fired from a dwarf cannon, and not directly from a player, they do not have a Ranged Strength stat. Cannonballs have a max hit of 30 and granite cannonballs have a max hit of 35 regardless of the player's Ranged level, although their accuracy depends on the player's highest attack bonus, regardless of whether it is slash, stab, crush, ranged, or magic. It will take into consideration the highest attack bonus of one of those.

These items can only be used in specific situations.