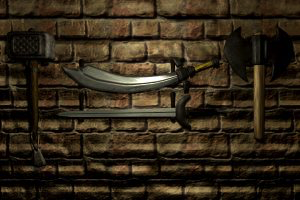 Artwork of some standard RuneScape weapons.

Weapons are wieldable items that a player can use to inflict damage in Combat.

All players wield weapons in their right hand. If a player is using a two-handed weapon, such as a bow or a two-handed sword, they may not have any items equipped in the Shield slot at the same time, thus two-handed weapons are held in both hands preventing the use of a shield. In the case of thrown weapons, which are stackable, multiples of the same thrown weapon may be equipped in the Weapon slot at once. A player may also equip a pickaxe or a Woodcutting axe in the weapon slot so that they may hold more ore or logs, respectively.

These weapons are more commonly used than the other weapons available because they don't have to be replaced unless upon death, and they do not require ammunition to use unlike most Magic or Ranged weapons. Most types of basic melee weapons come in eight different kinds of metal.

Most weapons have a primary attack mode in all three attack styles and a secondary mode in the Aggressive or Controlled style. The secondary mode is normally weaker, but it may be more appropriate to your target.

Chainmail armour is weaker against stabbing; platemail is weaker against crushing, while the slash attack is highly effective against cloth, leather or unarmoured targets. Against monster hide, the most effective style varies. The only absolute Defence against a particular attack is the Protect from Melee prayer, or the occasional NPC that requires something special to kill them, so you will still hit with the "wrong" attack and weapon, just not as often and with less damage (or not even at all, in the case of monsters like vampyres).

Overall, there are four attack styles: accurate, aggressive, defensive, and controlled. The first three add a hidden bonus of +3 to attack, strength, and defence, respectively. Controlled adds a hidden bonus of +1 to each of the three melee combat stats. Stab, Slash, and Crush are the three possible damage types. Different damage types are more effective against different types of armour or monster.

There are also a variety of 'novelty weapons' available. They deal out very little, if any, damage.

The various groups of weapons are summarised below. The level of Strength in each class is not definitive.

Weapons are made of different metals, some stronger and more expensive than others. Higher Attack levels allow wielding weapons of better metals. For example, a player needs an Attack level of 10 to wield a black weapon, whereas the player would need level 20 to wield a mithril weapon. Almost all metal weapons can be smithed, except for halberds, and any black, White, Dragon, or Barrows weapons.

A player fighting with the Darklight.

Kitchen weaponry are members only weapons that can be bought from the Culinaromancer's chest. To buy and wield more advanced kitchen weapons the player must complete the Recipe for Disaster subquests.

The weapons listed below are magic weapons. While most of them can be used in melee, they are more powerful when used to cast spells in combat.

All composite bows (excluding the composite ogre bow) have a speed in-between a longbow and a shortbow, an attack range equal to a longbow, and slightly higher accuracy compared to a shortbow or longbow of the same materials.

Darts can be forged from Bronze, Iron, Steel, Mithril, Adamantite, Rune and Dragon. Each metal bar can make ten dart tips. Darts can be poisoned and are stackable. Black and Dragon darts are available but cannot be smithed by players. Darts can only be made after completing the Tourist Trap quest.

Throwing knives are poisonable, and can be forged by players from Bronze, Iron, Steel, Mithril, Adamantite, and Rune. Each metal bar yields five throwing knives. Black knives are only dropped by Shadow warriors, Imperial Guard members, ankous, and cyclopes in the Warriors' Guild.

Thrownaxes come in Bronze, Iron, Steel, Black, Mithril, Adamantite, Rune and Dragon. They can only be bought from a shop in the Ranging Guild. The rune thrownaxe has a special attack ("Chain Hit") that, when activated in a multicombat zone with multiple enemies nearby, will bounce from enemy to enemy up to 10 times (10% special bar used per enemy hit).

A player fighting with a Seercull.

Bolts can be poisoned or tipped with gems which can be enchanted with the magic skill, providing metal bolts with passive effects.

Javelins can only be used as ammunition for light and heavy ballistae. They offer very high ranged strength at the cost of a very slow weapon.

Can be used as ranged, magic or melee weapons*. They are obtained using the Hunter skill.