Rangers are special agents of the Temple Knights despatched to capture Solus Dellagar, a dangerous mage responsible for thousands of deaths, during the quest Wanted! Under the guidance of Savant, fifteen rangers are sent in when a new knight tracks the mage down to the Rune Essence mine. However, Solus immediately casts Ice Barrage, instantly killing them all but severely draining his energy in doing so, weakening him. This allows the player to defeat him in combat.

Although rangers do not have an attack option, they are technically monsters, having 70 life points, and drop bones upon death. 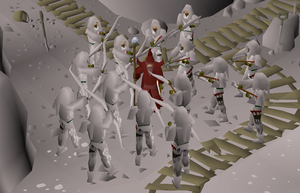