Ranis Drakan is one of the three vampyre nobles who rule over the Sanguinesti region, alongside his siblings Vanescula Drakan and Lowerniel Drakan, overseeing Morytania and Darkmeyer for his brother alongside Vanescula.

Born to unknown parents, Ranis was raised by his parents alongside his siblings Lowerniel, Vanescula and Draynor on the vampyre homeworld of Vampyrium. He grew up in a society structure, that had been created by the god Zaros a long time ago. The burgeoning House Drakan became one of the most prominent Vampyre Houses and ultimately was able to subjugate the other seven Houses under Lowerniel's leadership.

Eventually, Zaros returned to the planet and requested the vampyres to join him and contribute to his empire. Ranis went along with his siblings.

Ranis participated in the fall of Hallowvale. He got along well with Verzik Vitur, as Vanescula stated that both of them liked to "play" with their food. The two nobles were able to capture a Saradominist Justiciar and tortured him for several days. The Justiciar soon gave in and revealed a tunnel underneath the royal castle, which allowed Lowerniel to send vampyres, who were able to abduct Ascertes Hallow in the process. This would become well known in history, with Ranis taking most of the credit, although Vanescula believed that Verzik deserved it more. He was compensated richly alongside Verzik for swiftly ending the war, although what he obtained from Lowerniel remains unknown.

As Lowerniel spent more and more time about the Stone of Jas, Ranis was tasked with Vanescula to oversee Morytania on his behalf. Ranis complied and did not appear to care much about the state of affairs, unaware that his sister was plotting to overthrow Lowerniel for his perceived incompetence in the growing society.

Ranis maintained his relationship with Verzik throughout the years, and was an avid fan of the Theatre of Blood. He would donate several of his experiments to the Theatre, including The Maiden of Sugadinti , as well as helping her with her own Nylocas research.

He is first seen outside Castle Drakan feasting on some blood tithes offered to him by a juvinate alongside Vanstrom Klause and Vanesceula.

He was then confronted by the player, revealing that the Myreque were not destroyed. Although he had numerous powers at his disposal, alongside some vyrewatch assistance, he was no match for the ivandis flail and was killed by them. His body was left briefly at the castle grounds, where it was found by Vanstrom and Vanescula. The incident shook the vampyre nobility, and the player soon became known as the Slayer. Ranis' death would contribute to Lowerniel stepping out once more to deal with the growing Myreque threat.

Because of his love for the Theatre, his body is kept in a crypt below Ver Sinhaza. During A Night at the Theatre quest, the player decapitates his corpse and gives his head to the Mysterious Stranger in order to gather information on Verzik through Ranis's memories.

The player confronts Ranis Drakan with the Ivandis flail.

Ranis Drakan is level 233, and can only be harmed by the Ivandis flail. He will use melee and magic attacks that can hit up to 20 and deals damage through Protection Prayers. He can also cast Blood Barrage, which can heal him for half of the damage dealt. Occasionally, he will charge an attack and explode, hitting up to 30. The damage can be reduced by running away from him when he is charging the attack. 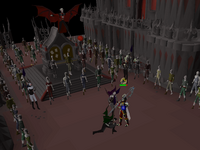 After he reaches 65% of his health, he'll summon two level 87 vyrewatch and will fly airborne. Every now and then, he will throw blood bombs at where you are currently standing, which can hit up to 40. It should be noted that this attack can hit the vyrewatch, so it can be used to aid combat, especially at lower levels. When you kill the vyrewatch, you will fight Ranis again until he reaches 25% of his health, where he will then summon two vyrewatch again.

After killing them, he will go berserk and attack the player. During this last phase, his attacks are much faster and more accurate, but only have a max hit of 6. Using Protect from Melee will easily defeat him in the last phase.

If you die during the fight, your items can be retrieved from the chest located north-west of the noticeboard for 20,000 coins.