From Old School RuneScape Wiki
Jump to: navigation, search
The RuneScape Wiki also has an article on: rsw:Rapier
For the Theatre of Blood reward, see Ghrazi rapier.
Rapier? (edit)? (edit)

The rapier is a very thin sword, most effective for piercing. It requires an Attack level of 40 to wield. Its stats are the same as the rune scimitar but with the stab and slash attack bonuses swapped. Prior to the addition of the Brine sabre, the rapier and rune scimitar were tied for best-in-slot melee weapon for 40 attack-tier weaponry .

It was used by Gentleman Mallard until his disappearance at sea. The sword was later found by Smith of Mos Le'Harmless, who will sell it to players for 25,600 coins. Cabin Fever must be completed to reach the island, making it an indirect requirement for this weapon.

To be able to understand Smith and purchase the rapier, the player must have a Book o' piracy in their inventory. Talk to Smith and select the cutlasses option in the dialogue box. 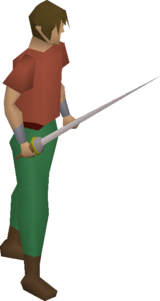