The Rat & Bat is the bar located in south-east Slepe. This bar does not sell ordinary beer, however it does sell bloody bracers for the price of 99 coins. It is the only bar where bloody bracers can be acquired.

The bar has two floors, although the upper floor is inaccessible. Carl states that the previous bartender fled to avoid the Sleeper Plague, although it is highly implied that he is lying as through the oculus orb, a skeleton can be found slumped on a wall with blood stains on the floor. During the events of Sins of the Father, Carl flees after the player exposes the drinks being laced with the Elixir of everlasting, with Roy replacing Carl as barkeep. 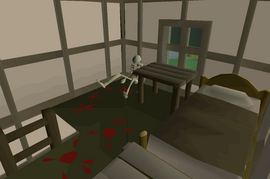