From Old School RuneScape Wiki
Jump to navigation Jump to search
This article is about the monster. For the historical spell, see Reanimate Dragon.

A Reanimated dragon can be spawned with the spell Master Reanimation. It can be reanimated where it was killed, but a player can only reanimate the ensouled head that they loot themselves. If a player teleports or trades the ensouled head, it must be reanimated by the Dark Altar. The player must also find an area large enough for the dragon. Once killed, it will give the player 1,560 Prayer experience.

Players are advised to bring some sort of dragonfire protection or make use of safespots as the dragon is capable of using dragonfire. 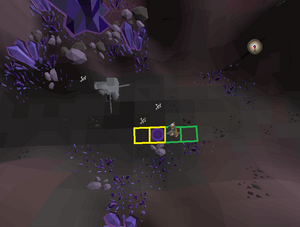 When using a cannon on reanimated dragons at the Dark Altar, players are advised to use the image to the left for their positioning. The two yellow squares can be used to reanimate the dragon, in order to ensure two successive cannonballs to fire every full rotation. In order to effectively click both the dragons and the cannon, point the camera facing south as shown in the image.

Players not using a cannon can use all four highlighted squares to spawn a reanimated dragon.