Inspect Skrach Uglogwee to start the quest. Head to the Feldip Hills (fairy ring code aks) and talk to Rantz. He will tell you that he wants to travel to Karamja to make some type of potion, but before that, he wants you to meet him south-east of his cave. Walk directly south-east towards the transportation symbol on your map. Talk to him again, go through the dialogue; he will kick over a tree and ask you to make it into a boat. Use your axe on it TWICE to make a boat. Talk to Rantz again and he will shoot an arrow to a tree on Karamja. Talk to him once more and he will tell you to cook a chompy there for good luck. If you don't have any raw chompies, kill a chompy bird or two and gather the raw chompies before you leave. If you didn't bring Logs, chop down a normal tree in the area to get one log. 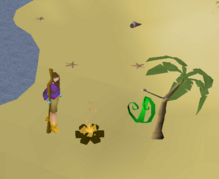 The location you need to make the fire.

The tree with the arrow in it is north-west of Tai Bwo Wannai village, just north of Banisoch, who is marked with a dungeon icon - the tree is denoted by the Transportation icon.

Make a fire next to the tree, and then, use your iron spit on a chompy and cook it. If you succeed, Rantz's kids will take the boat to you and take you back.

Rantz will tell you to make a balloon toad to use as bait, to catch the Jubbly bird. 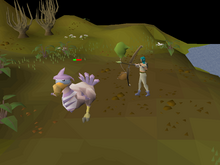 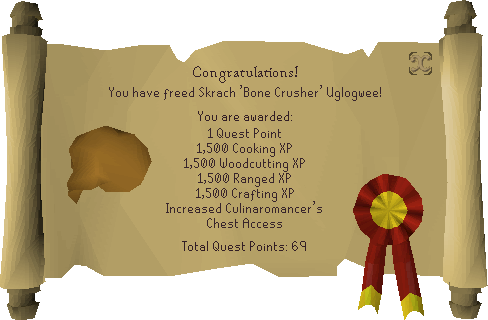