The Red chinchompa hunting ground is a small dungeon located south of Feldip Hills, just south of the Hunting expert, who sells the Hunter cape. The cave is guarded by another Hunting expert and will only give you entry after completing the Hard Western Provinces Diary.

The area contains 15 carnivorous chinchompas which is beneficial to those who wish to hunt red chinchompas, due to being almost always crowded by other players outside of the cave.

A Dwarf multicannon cannot be set up here, stating "It would be dangerous to set this up now with all these spontaneously combustible rodents around." 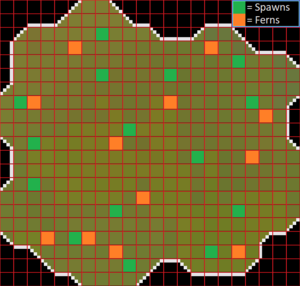 Because this area is enclosed, players can take advantage of chinchompa spawn locations which have a wall nearby. Having a wall nearby reduces the amount of directions in which a chinchompa can travel to get away from your traps and also reduces the total number of tiles the chinchompa in question can physically move to, as they have a maximum roaming distance of 8 tiles (9 tiles, if you count the tile they spawn on).

Contrary to popular belief, players can use each other simply by being on the same world within this room. Having other players in the room, while it reduces the amount of times you will encounter the chinchompas which spawn near where the other players are positioned, it greatly reduces the time of absence of the chinchompas which spawn near you. As your chinchompas will frequently escape, they will likely and promptly be caught by other players and then respawn next to you within 2 seconds. This can be on par in effectiveness to "standing and shooting" (where you are to kill chinchompas with a ranged weapon when they escape).