A Redwood tree requires level 90 Woodcutting to chop down and grants 380 Woodcutting experience per set of redwood logs. These trees are found in the Woodcutting Guild, and can also be planted with a Redwood sapling in the advanced tier of the Farming Guild at level 90 Farming. Players may protect the farm patch by paying Alexandra six Dragonfruits.

According to the book Gielinor's flora - trees, redwood trees are extinct in the wild due to heavy deforestation caused by early settlers. However, due to conservation efforts by Hosidius, they can still be found in controlled environments.

As the trees are very large, there are two levels built around it with scaffolding (one for the Farming Guild). The first level is accessible via the rope ladders at the very bottom, while the second level is accessed via the carved entrance between the trees. Each side of the trees have 2 sections to chop, totalling to 6 sections per tree and 24 sections overall. Uniquely, players can only obtain clue nests from redwoods, not seed, ring, or egg bird nests; this also means that wearing a strung rabbit foot has no effect when chopping redwoods.

Cutting redwoods can provide a player around 60,000 to 80,000 experience per hour. A lumberjack outfit can be worn in order to increase experience gained by up to 2.5% for the full outfit. Although redwoods grant much slower experience than power-cutting teaks, they require extremely little attention, as one side can typically be chopped for minutes before it runs out.

Players have a 1 in 11 chance for every log chopped of depleting a section of a redwood tree.[1] 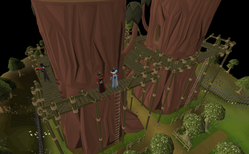 A group of players chopping redwood. The entrance to the upper level can be seen on the right tree.