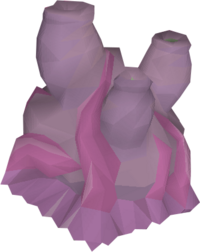 
The respiratory system is encountered during the fight with the Abyssal Sire.

Four systems are found in each chamber. They are protected by several tentacles which will attack players if they get too close to them. The tentacles protect the systems, and as long as they are awake, damage dealt to the systems will be reduced greatly. When all four systems are destroyed, the next stage of the fight begins.

Respiratory systems can only be attacked with magic, ranged or a halberd. In addition, they will heal one hitpoint every five seconds.[1]

Respiratory systems are considered by the game to be Abyssal demons, allowing accuracy and damage buff of the slayer helm to be utilised against them.[1] They do not count towards the task.