The Restored shield is an unobtainable item released with the rework of Shield of Arrav. Presumably it would have been formed by combining the two halves of the Broken shield, but this is impossible as the player can only ever have one.

It is unknown what role it would have played in the quest, but it was possibly only ever intended to appear on the quest reward scroll. 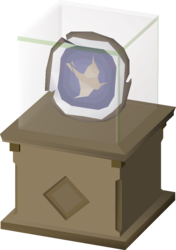