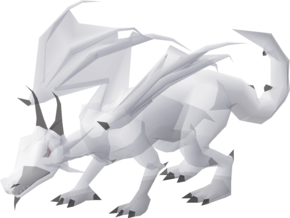 The revenant dragon is a type of revenant that inhabits the Revenant Caves, which is a PvP-enabled area that is part of the Wilderness. Like all revenants, they can restore their health when it falls below 50% and will react to a player's protection prayers; wearing a charged bracelet of ethereum will reduce all revenants' damage by 75%.

The Salve amulet can be a good option for killing revenants due to the damage bonus it provides while being easily replaceable, as PKing in the Revenant Caves is extremely common.

All revenants share the same drop list. The higher the revenant's level, the higher the chance they drop an item alongside the guaranteed drops. Wearing an amulet of avarice will cause all drops in the Revenant Caves to be noted.