From Old School RuneScape Wiki
Jump to navigation Jump to search
The RuneScape Wiki also has an article on: rsw:Revenants
This article is about the monsters. For the music track, see Revenants (music track). 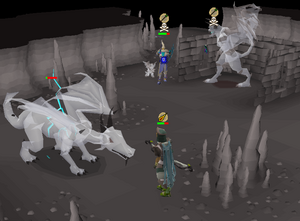 A player fights a revenant dragon within the Revenant Caves.

Revenants are the ghostly versions of creatures slain during the God Wars found in the Revenant Caves within the Wilderness in levels 19 to 34. They are extremely dangerous monsters, being capable of hitting very high and accurately for monsters of their combat levels. As the Revenant Caves / Forinthry Dungeon location is members, all revenants are members creatures.

Revenants have a fairly generic, but very generous drop table for their level, with various buffs players can acquire making them significantly easier to kill despite being stronger than monsters around their level. Being in the Wilderness, the player is always at risk of getting killed by other players. The caves they inhabit are Singles-plus combat, where PvP situations take priority over PvM.

Unique drops from the revenants include revenant ether, which is used to charge a bracelet of ethereum, providing protection and tolerance from the revenants, and wilderness weapons. They also drop various ancient artefacts, which can be sold to the Emblem Trader wandering within the Revenant Caves for a set amount of coins. However, this can only be done on the official Bounty Hunter world. Lastly, they can drop ancient crystals, four of which are used to construct an obelisk in the superior garden of a player-owned house.

A revenant imp healing itself.

Revenants are capable of using all three forms of combat and are much more dangerous than their combat levels suggest. Their attacks have very high accuracy against any player not using a bracelet of ethereum regardless of their defensive bonuses and their magic attacks can hit up to 10 players standing on the same tile as their target. In addition, their attacks change based on the player's defensive stats and protection prayers being used. They are also capable of healing themselves when their health falls below 50%, though this only occurs a limited amount of times. When it heals itself, a lightning strike can be seen.

Being undead, revenants are susceptible to the effects of the salve amulet and its enchanted version.

Revenants drop a variety of high-valued armour, weapons, and skilling resources. Revenants can also drop the unique Wilderness weapons, and the ancient artefacts which can be exchanged for large sums of coins. The drop rates for the Wilderness weapons are increased by 5 times the normal rate when assigned a revenants Slayer task from Krystilia. This boosted rate is not applied if the player is assigned ghosts as a Slayer task. All revenants share the same drop list. However, higher-leveled revenants are more likely to drop these items compared to lower leveled ones.

In addition to the combat level modifier, being skulled increases the drop rate of various items by ~45%, such as wilderness weapons, most ancient artefacts, yew and magic seeds and the ancient crystal. Being skulled decreases the drop rate of the ancient emblem by nearly 3.5 times the normal rate and removes the dragon med helm from their drop table. The boost for being skulled stacks with the increased drop rate of Wilderness weapons while on a revenants Slayer task. Note that the skull obtained by playing on a high-risk world does not provide a boost to the revenants' drop table. Wearing an amulet of avarice will cause all of the revenants' drops to be noted if applicable. 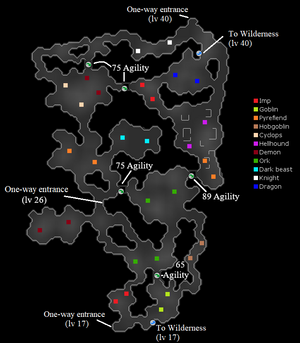 A map of the Revenant Caves, displaying the spawn locations of different types of revenants.

Initially, revenants were to drop Ancient Warriors' equipment much like their RuneScape counterparts had when they were moved into the Forinthry Dungeon. Their weapons were not included for balancing reasons; to compensate for this, other rewards were designed. However, the polls for both the armour and the new equipment did not pass. To ensure that revenants would still be worth killing, they were given a generous, but generic drop table as a result. This included a rare drop of 100 dragon platelegs or plateskirts, which was criticised as it was considered artificial and most of it would be lost if the player was killed.

On an update on 8 February 2018, revenants gained a massive drop buff as it was determined that players were not obtaining more than the stated profit per hour (which was 2,000,000 per hour). This also added the ancient medallion, effigy and relic to replace the 100x multiplier, and revenants were given a massive drop overhaul, dropping many resource items like runite ores and black dragonhides.

Immediately after the update, players began to complain about how many resources were entering the game, devaluing other bosses, skilling and granting players more profit per hour than originally intended. Many players began to compare the revenants to other monsters such as brutal black dragons, Zulrah and Vorkath, other monsters with generous drop tables but had a requirement to access. Since revenants had no requirements to kill and the fact that they were killed much faster, items that the revenants dropped began to crash at an alarming rate. Initially, Jagex determined that the flow of resources into the game was meeting the expected profit rate that was intended.

Eventually, more player complaints had Jagex look into the revenants again, from which they determined that only some players were making profit at or above the expected value, while many others were not, in addition to the inflated kills per hour. On 21 February 2018, a hotfix was implemented:

The changes made on 21 February caused player complaints on revenants no longer being a viable money making method for the risk involved by being in a multi-combat area in the Wilderness. In an update on 1 March 2018, Jagex stated that they have "overstepped it a little with the reductions" based on post-change data analysis, and made the following changes as a result:

Despite revenants being stabilised in terms of drops and the only recent notable change being that the bracelet of ethereum only blocked 75% of a revenant's damage, there were player complaints regarding gold farming and protection clans preventing legitimate players from killing revenants. Players suggested to either change or remove the revenants, although a majority supported roaming revenants, in that they would wander the Wilderness like they did in RuneScape from 2007 to 2011.

On 16 October 2020, Jagex decided against roaming revenants, instead opting to change how they would work in the caves.

In an update on 21 October 2020, the following changes were applied to revenants:

The changes applied on 21 October 2020 were not satisfactory as revenants were providing much less gold than what had been announced on release, as there were very few, extremely far spawns and killing them could be irritating due to their ability to rapidly restore health below half.

On 27 October 2021 in an update, Jagex gave revenants the following changes: