Warning: The entire area counts as the Wilderness. Players will be able to attack you here and the area is a rather popular one to do so. 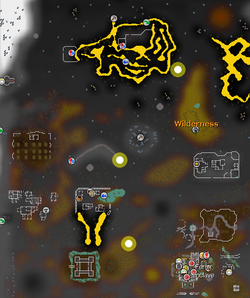 The location of the Revenant Caves.

Note: Without 84 Agility, using the lower levelled entrance is not recommended, as players have to navigate around the whole dungeon to reach the more desirable revenants. The level 89 shortcut is a good escape route for players if their aggressor lacks the Agility needed to cross it. The shortcuts do make the player vulnerable as they navigate it for a few seconds however.

A revenant imp healing itself.

Revenants use all three forms of attack. Their attacks have very high if not 100% accuracy, and will often deal high damage. They will react to a player's overhead prayers and defensive bonuses. By default, all revenants attack with Magic, but can quickly adapt based on the player's defensive bonuses and prayers.

A revenant's magic attack, which resembles a weaker form of Ice Barrage, can momentarily freeze the player for several seconds and hits up to nine other players on the same tile as their target. Revenants are also capable of healing whenever their health falls below 50%. The exact healing mechanics are as follows:

To prevent most of a revenant's damage and aggression, a charged bracelet of ethereum must be worn at all times. The bracelet is charged by revenant ethers, which all revenants are guaranteed to drop. For each attack the revenant does, its damage is reduced by 75% by a charged bracelet, with each attack consuming one charge. Note that it will not prevent the freezing capability of a revenant's magic attacks. The bracelet is always lost upon death. If a bracelet is taken, it is recommended to give it 100 charge as it is more than enough to be self-sufficient inside the caves.

Always keeping minimal risk in the Wilderness, players' main gear setup should consist of only three items (or four with Protect Item), such as a helm, black dragonhide body, legs and a mainhand weapon based on combat class, in addition to the necessary items: a bracelet of ethereum and a means of teleportation.

The royal seed pod and any charged dragonstone jewellery are capable of teleporting non-teleblocked players to safety at level 30 Wilderness or below; the former can be easily re-obtained and is a one-click use, allowing an observant player to easily escape player killers. Since death is inevitable, spare bracelets, amulets, and ether are recommended to have in the bank. 50 ether for the bracelet will suffice as the bracelet and its ether is always lost upon death and the player can easily accumulate more ether than what is consumed while fighting revenants.

A Wilderness weapon requires 1,000 ether to charge plus additional ether for usage; no more than 200 is necessary per trip for a total of 1,200 ether, assuming no deaths. Otherwise, the weapon will have to be recharged and reloaded. See the equipment section below for cheaper alternatives, albeit less kills and less profit.

Although killing revenants can be one of the most lucrative sources of income for all players who survive being intercepted and interrupted by player killers, it is more beneficial for higher-level players, who have access to better tanking equipment and stats. Some knowledge in PvP is beneficial; e.g the ability to fight back (if anti-pk'ing), the ability to quickly react and predict to incoming attacks, Protect from Magic when running away and not overbrewing) increases the chances of survival. Using barrows armour alongside Dinh's bulwark or an Elysian spirit shield further increases survival; with a good defensive setup, it should be very easy to escape most player killers, with some outright not attacking due to not being worth their time.

Saradomin brews are the player's best friend in escaping player killers, with super restores to counter the magic drain. The revenants drop plenty of blighted food, which is a tertiary drop and helps extend trips; make sure to close the looting bag when picking them up to eat.

The player killer's equipment generally determines how experienced they are, if they're alone or not and which revenants are being slain. Player killers in all but the revenant knight and dragon areas generally use the standard spellbook as it is very easy to escape them if they were on the ancient spells; for the other two mentioned, ancients are typically used as it is harder to escape due to the twists and turns. Player killers may also travel as part of a group and bypass singles+ by waiting for the 10 seconds to expire, although a player can escape themselves if they manage to get the last hit on their aggressor and run away while spamming the logout button.

If arriving to the revenants through the upper entrance via burning amulet, it is recommended to use Protect from Magic to avoid being seared by any potential green dragons as the player will run past a few doing so. The other entrances do not have this concern.

While revenants are being slain by players, there is a possibility of a revenant maledictus spawning in one of several locations across the caves. If the player has no intention to fight it, it is highly recommended to leave the area as it will bring unnecessary attention to the location it spawns in and does hefty damage. Players killing revenant hobgoblins or knights do not need to worry about it as the maledictus will only spawn in large areas, with both of these revenants in cramped and narrow passageways.

As revenants have very high accuracy, the bracelet of ethereum is highly recommended when battling them.

Regardless of your inventory setup, you should have a teleportation item capable of bringing you to safety at or below level 30 Wilderness, such as a royal seed pod or charged dragonstone jewellery, in addition to the following: