From Old School RuneScape Wiki
(Redirected from Rfd)
Jump to: navigation, search
The RuneScape Wiki also has an article on: rsw:Recipe for Disaster

For a full list of all subquests, see the Full guide.

Recipe for Disaster is the 100th quest released by Jagex, being a sequel to the Cook's Assistant quest. It is composed of 10 subquests, ranging in difficulty from easy to very hard. It is intended to be a quest which nearly any member can start, but which only the most accomplished and willing players can complete.

The cook is preparing for a party in Lumbridge. He tells the player that a hundred years ago, a very important meeting was held in Lumbridge. Supposedly his ancestor, Franizzard Van Lumbcook, cooked such an amazing banquet for the occasion that he was offered a job as head cook, along with all his descendants, for life.

This big, important meeting is held in Lumbridge every ten years and today is the 10th meeting. As he cannot think of a brilliant dish himself, he intends to use his ancestor's recipe for the feast. However, he needs help gathering the ingredients, again. Gather the ingredients and complete the subquest to receive an invitation to The Feast.

The Secret Council
The music that plays during the long cutscene.

Enter the doors to the dining room to begin the feast. The members of the Lumbridge council are gathered at the table:

Right before you enter, the Duke will get the strange box event and will leave the room to fiddle with it, and Osman will get taken away by Evil Bob. At this point, you will enter the room. A short while later, the Culinaromancer crashes the party and starts to attack everyone at the dining table with magic spells. Luckily, Gypsy Aris will show up and freeze everyone in time (except the player and herself).

The Gypsy explains that the Culinaromancer was a cook in Lumbridge a hundred years ago and had threatened the secret council with death, only to be thwarted by the Duke's assistant, who managed to trap him in another dimension. This assistant was the cook's ancestor, and was made head cook for life.

The current head cook, whom you helped build the feast, apparently created a powerful food-magic, which released the Culinaromancer from his prison. Seeing him, the Gypsy casts the aforementioned spell, so that you both can protect the council from the Culinaromancer's attacks. While she can easily seal the Culinaromancer in a heartbeat, due to the fact you caused the Culinaromancer to awaken she holds you responsible and sends you to save them as the magic is causing a temporal paradox that could destroy the known reality with the magic.

After the feast, you will be able to enter and exit the dining hall at will. However, the room will be in a dormant state. To release each member of the council from the Culinaromancer's spell, you must feed each of them their favourite food. The Gypsy and Cook will both be there to help you. You can complete these subquests in any order, and start as many of them at a time as you want.

After you give each member their favourite dish, Gypsy teleports them away to safety and tells you how many more council members are left. Each subquest gives 1 quest point and some access to the Culinaromancer's Chest, as well as additional rewards such as items or lamps of experience.

After saving the final member of the Secret Council, the Culinaromancer will retreat through a portal back into his own dimension. Gypsy Aris tells you to go through the portal to finish him off before he causes more trouble.

The safest way for an ultimate ironman to defeat the Culinaromancer is to suicide beforehand at the nettles in Edgeville and then only take the food and weapons that you require. After each fight you should repeat and restock on food at the warriors guild and Alfonse the waiter in Brimhaven.

You can leave and stock up after defeating one boss without losing your place in the fight. Prayer also cannot be used during any of the fights. 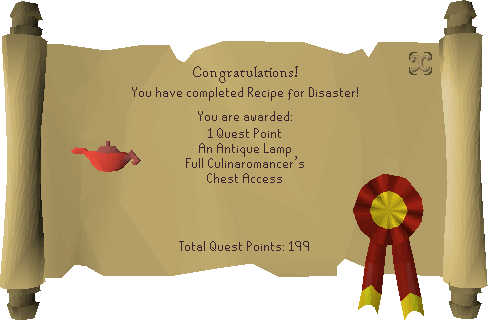 If you have completed all 10 subquests for "Recipe for Disaster", you will have received the following: