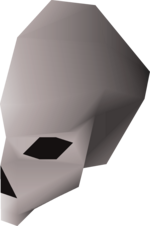 A right skull half is one of 4 parts needed to make a skull sceptre, and can be found by killing a Minotaur on the first level of the Stronghold of Security, the Vault of War. These minotaurs can be either low or high level and are not aggressive. It is combined with a left skull half to make a strange skull. Doing so will result in a chatbox message stating: "The two halves of the skull fit perfectly, they appear to have a fixing point, perhaps they are to be mounted on something?" It cannot be traded, bought or sold. It is a fairly uncommon drop, as are the other pieces of the sceptre. It seems to have the highest drop rate of any of the pieces of the sceptre. You can also get more than one skull half at a time, without using the drop trick. Interestingly, the skull half looks like that of an Ankou, while the left skull halves dropped by Ankous seem to be minotaur skulls.

Skull sceptre pieces can be crushed with a chisel to yield Bone fragments, or used on a Skull sceptre (i) to add to its current charges. When chiseled, the right skull half will provide a base quantity of three bone fragments, increasing by one for each Varrock diary tier the player has completed.