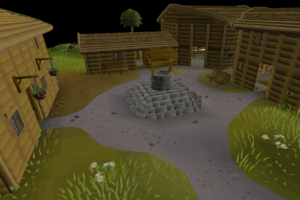 Rimmington is a village in southwest Asgarnia. It is a very small village, but popular for use of the player-owned house portal and Phials for training Prayer.

Rimmington can be entered by walking south from Falador, and from walking west from Port Sarim. Members can teleport to their player-owned house in Rimmington as well. You can also use a skills necklace to teleport to the nearby Crafting Guild.

) has two floors. On the main floor is the shop keeper and the shop assistant. The store rarely has anything of value in it, mainly willow logs and low level items. Since Rimmington is so far away from a bank, players rarely sell items to the store. There is nothing other than decorations on the 1st floor[UK]2nd floor[US].

is located south of the Rimmington General Store. Rommik sells supplies useful for crafting. His store is exactly the same as the crafting store in Al Kharid. Players can purchase chisels, ring moulds, necklace moulds, amulet moulds, needles, thread, holy moulds, and tiara moulds from him.

) is located east of Rommik's store. Brian sells supplies used for ranging. His store is very similar to Lowe's Archery Emporium (located in Varrock), though is much less busy. Players can purchase steel arrows, mithril arrows, adamant arrows, oak shortbows, oak longbows, willow shortbows, willow longbows, maple shortbows, and maple longbows from him, however he doesn't sell bronze arrows because they spawn reasonably fast nearby. Two logs and a bronze arrow respawn on a nearby table in his building. There are also rats in his house which can be killed for rat's tails for the Witch's Potion quest.

) northwest of the general store. Behind Brian's and Rommik's stores are many willow trees. There are also some oak trees to the east of the village. A bank is very far away, so few players cut these trees. However, it is a place to level up Firemaking by cutting a full inventory of logs and then burning them all and repeating. However there is almost no space to burn logs in a straight line making it a hassle to get done.

Rimmington is the start point of only one quest, which is free-to-play:

Players may travel to the Corsair Cove to talking to Cabin Boy Colin located on the north ship, after the Corsair curse quest.

There is a bush farming patch

northwest of the village which can be used by members for farming.

is in the centre of the village which can be used as a water source.

is northeast of the village. It is a small mine which normally has low level miners, as the mine contains tin, clay, iron, copper, and two gold rocks.

The Crafting Guild is northwest of Rimmington. However, players require a Crafting level of 40 to enter the guild.

Players starting Construction can visit their house in Rimmington. To buy a house, however, they must visit an estate agent in any of the following cities: Varrock, Falador, Seers' Village, or East Ardougne. A portal

found north of Rimmington can be used to go to their house.

Phials the NPC is located in the general store. His location close the Rimmington house portal makes him a fast way to train Prayer by having him unnote bones.

There is a building northwest of the village known as "Melzar's Maze". It is a fairly large dungeon that can only be entered with a key obtained during the Dragon Slayer quest.