The ring of coins is obtained as a possible reward from master Treasure Trails. It can change the model of the player to look like a pile of coins.

While this effect is active, the player cannot move, or it will end. If another player right clicks on the character disguised as coins, the usual options will appear, i.e. "Walk here", "Follow" etc. 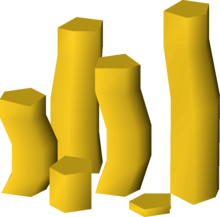 Players take this form when the ring is active.

The ring is often used to prank other players in crowded areas such as the Grand Exchange, where drop parties are sometimes had even without announcements. Disguising into gold coins is usually accompanied by saying something similar to what 3rd party clients would indicate over a stack of coins, creating an impression that there is an actual large stack of coins on the floor. Hasty players would then rush on the player wearing the ring trying to obtain the large stack of cash.

For an exhaustive list of all known sources for this item, see here (include RDT).
Retrieved from ‘https://oldschool.runescape.wiki/w/Ring_of_coins?oldid=12187088’
Categories:
Hidden category: