The ring of wealth is an enchanted ring made by casting the spell Lvl-5 Enchant on a Dragonstone ring, requiring level 68 Magic and granting 78 experience. Wearing this ring while killing monsters increases the odds of getting a drop from the rare drop table if it is rolled, and automatically collects any money (coins, tokkul, and numulites) dropped by monsters the player kills. It can only be charged at the Fountain of Rune to provide useful teleports to wealth-related places.

The price difference between a full ring and an empty one is 1,103, so each charge costs about 221.

Players can imbue the ring using a ring of wealth scroll, which can be purchased from Justine's stuff for the Last Shopper Standing for 5 Last Man Standing points. Wearing an imbued ring doubles the chance of obtaining a clue scroll from monsters and from skilling while in the Wilderness. 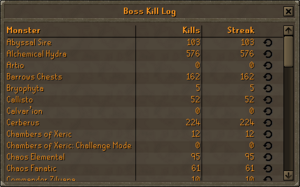