The ring of wealth is an enchanted ring made by casting the spell Lvl-5 Enchant on a Dragonstone ring, requiring level 68 Magic and granting 78 experience. Like other dragonstone jewellery, it can be charged to provide teleports, albeit only at the Fountain of Rune. Wearing this ring (whether charged or not) while killing monsters will automatically pick up coins, tokkul, or numulites dropped by monsters. When worn it also removes the chance to receive a "nothing" drop when accessing the Rare drop table and Gem drop table. See below for more information about this feature.

The price difference between a fully charged ring and an uncharged one is 1,839, so each charge costs about 368.

Players can imbue the ring using a ring of wealth scroll, which can be purchased from Justine's stuff for the Last Shopper Standing for 5 Last Man Standing points. Wearing an imbued ring in the Wilderness doubles the chance of obtaining a clue scroll from monsters and from skilling.

Wearing this ring completely removes the chance to receive "nothing" as a result of accessing the rare drop table and gem drop table. This also means the effective chance of receiving a gem or a mega-rare item from these tables is significantly increased, due to those two tables containing a "nothing" drop on them.

It should be noted that the ring's rare drop enhancement only affects the specific drops that are accessed through the rare and gem drop tables. It does not boost the chances of receiving monster-specific unique drops, nor does it remove any "nothing" drops that are specific to a monster's own drop table. It also does not affect gem drops from monsters such as Ogress Warriors, considering their gem drops are not accessed through the gem drop table specifically. 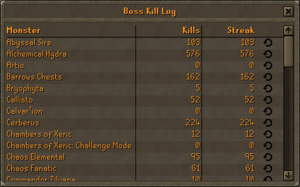