The Rising Sun Inn can be found on the west end of Falador, across from the bank. The bar is run by three barmaids: Kaylee, Emily, and Tina. All three barmaids will sell any player a wizard's mind bomb, dwarven stout, or Asgarnian ale. This bar does not sell ordinary beer. It does, however, offer the unusual service of buying back (noted or unnoted) empty beer glasses for 2 coins each.

This bar is also a stop on the miniquest, Alfred Grimhand's Barcrawl, and is involved in the quest Recipe for Disaster. It is also the place where many players obtain a wizard's mind bomb for the Dragon Slayer I quest. On the top floor of the bar you can find Tina and a drunken man, who has some mildly amusing dialogue.

Kaylee and Tina both have brown hair, while Emily's hair is blonde, and all three barmaids wear the same apron with an image of the tavern's logo. The dialogue between each of them is the same as well.

Players are able to challenge each other to tabletop games from Burthorpe Game Room while within the bar.

The banner hanging behind the bar. 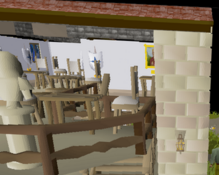 The ceiling of the Rising Sun Inn with the grey bricks which used to make up Falador.
Retrieved from ‘https://oldschool.runescape.wiki/w/Rising_Sun_Inn?oldid=14260020’
Categories:
Hidden category: