From Old School RuneScape Wiki
(Redirected from Risk)
Jump to: navigation, search
The RuneScape Wiki also has an article on: rsw:Items Kept on Death 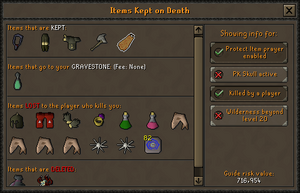 The Items Kept on Death interface.

Items Kept on Death is a menu accessed from the Worn Equipment button on the Interface that shows which items players will keep when they die. Normally, the three most valuable items will be kept upon death. Conversely, if a player is skulled, all items are dropped upon death. If the Protect Item prayer is activated, one extra item will be retained, even if skulled.

The values of items are based on Grand Exchange values, if eligible. Other items use their designated value.

Upon death, the player will respawn with full health and Prayer at their selected respawn point, and their three most valuable items. If the death occurred outside the Wilderness, a PVP world or an instance with an item retrieval service (such as Vorkath), all untradeable items are also kept, apart from a few exceptions. The remaining items are dropped on the tile where the player died (the items only being visible to the fallen player), after which a 60 minute despawn countdown begins. It should be noted that the in-game Items Kept on Death interface does not account for potential untradeable items that are kept.

The respawn points available are:

Ultimate Ironmen will drop all tradeable items on the ground upon unsafe death. They are also unable to benefit from Protect Item despite being able to activate it.

Wilderness (20 and below): Untradeables kept in broken state (fee to repair)

Wilderness (21 and above): Untradeables lost

On release of Old School RuneScape, players always kept only their three most valuable items, regardless of whether they are untradeable. Items that were dropped on the ground remained visible exclusively for the player for only one minute, and one additional minute for everyone before disappearing. Due to network issues with the game servers, at least partially caused by DDoS attacks, the time for the items to appear for others and despawn was incrementally increased, and untradeable items were made always protected.[1][2][3] As these changes were meant as a temporarily relief, Jagex has since considered new ways to re-implement more punishing death mechanics.[4]

Upon death in the Wilderness, players keep only their three most valuable items, or four with Protect Item active. Being skulled decreases this to zero and one, respectively. Below level 21 Wilderness, unprotected untradeable items that are deemed useful for combat (such as fighter torso) will become broken and remain in the player's inventory, while other unprotected untradeable items will be dropped on the ground. Above level 20 Wilderness, all untradeable items that are not protected will be turned into coins depending on the value, unless it has a tradeable equivalent; for example, a toxic blowpipe lost on death will be dropped as an uncharged blowpipe as well as the darts and scales it contained.

A Trouver parchment can be applied to certain untradeable items to prevent them from being destroyed at level 21 Wilderness and above.

Using a single item (usually weapon) to minimise risk when player-killing is called 1-iteming. As long as a skulled player has Protect Item and doesn't get smited, an item will be protected.

3-iteming refers to a player limiting themself to only three items when going out into the Wilderness. In order for this to work, said player must remain unskulled, which means they cannot be the aggressor in combat towards another player nor enter the Abyss without wearing an Abyssal bracelet. Since Items Kept on Death allows the three most valuable items to be kept upon death based on their Grand Exchange values, players can effectively 3-item (or 4-item with Protect Item activated, where the 4th item is colloquially referred to by players as a "+1") and retain their items as long as they are not skulled.

Warning: When players are 3-iteming, they should also keep their ammo and any stackable items down to a minimum (e.g. no more than 100—if teleports or law runes, no more than 10). It is highly recommended that players 3-iteming or 4-iteming manually set their Player 'Attack' options to "Hidden" whilst refraining from fighting back against Pkers. Additionally, such players should not use multi-hitting weapons, spells, or ammunition (e.g. Dragon 2h sword's special attack, burst/barrage spells, chinchompas, etc.) within attack range of any nearby multicombat areas (even if only fighting against aggressive Pkers via auto retaliate). Abiding by these three suggestions virtually eliminates the risk of falling victim to various skull tricking strategies.

The term safe refers to the fact that it is safe to die within the minigame. Safe minigames, such as Castle Wars, Duel Arena, or Pest Control, allow players to keep all their items upon death.

Safe areas include all random event areas, such as Leo the Gravedigger's event space, as well as player-owned houses. The Items Kept on Death interface will show that players will keep all their items upon death.

Certain untradeable items cannot be kept upon death. This is regardless of whether the item is the most valuable item, or if Protect Item prayer is used. When player dies, the item is lost forever and will not appear to other players.

Some of these items include: