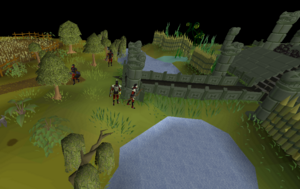 The River Molch a small river in Gielinor that runs through the northern part of the Kebos Lowlands, a members-only region.

The river begins at Lake Molch, though it has been partially blocked by rocks between Molch and the Battlefront, and runs between the fertile land where the Farming Guild is located and the Kebos Swamp.

There are two crossings in the river, one near Gordon's farm south of the Farming Guild and another south of Keith's farm, where the connecting bridge leads to Molch.

Because of the proximity of the lizardmen, Shayzien sergeants, soldiers and archers have been assigned to the areas where these crossings are to guard the farmers in the event of an attack, where they can then quickly call reinforcements from the Battlefront. However, as the lizardmen are focusing their efforts on invading Great Kourend just east of there, none have attempted to cross the River Molch.

The river has one fishing spot along it, where players can catch trout and salmon. Doing so is a task in the easy Kourend & Kebos Diary.