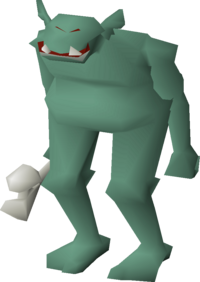 River trolls appear when attempting to fish in the Enchanted Valley. If Swan Song has been completed, the troll will burst out of the water saying that the player killed the Sea Troll Queen before attacking.

Despite being considered a troll for the purposes of a slayer task, they give very little experience and therefore not recommended to be slain for a slayer task.

As with all other aggressive random events, it was removed in an update.

Drop rates estimated based on 2,712 kills from the Drop Rate Project, unless otherwise cited.