From Old School RuneScape Wiki
Jump to navigation Jump to search
The RuneScape Wiki also has an article on: rsw:Rock-shell gloves 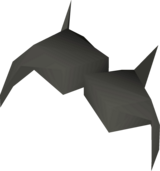 Rock-shell gloves are a members-only piece of armour. Players don't require any stats or need any quests completed in order to wear the boots or gloves, unlike the other pieces of the Rock-shell armour set.

The gloves are obtained from Giant Rock Crabs and King Sand Crabs as drops or can be obtained by trading with another player. The player does not need to wear the boots along with the other pieces of the Rock-shell armour set to have an honorific added to their Fremennik name in Rellekka.

These gloves can be stored in the armour case of a costume room, as part of the rock-shell armour set. Ultimate Ironmen will be unable to retrieve individual pieces until the full set is stored.

For an exhaustive list of all known sources for this item, see here (include RDT).
Retrieved from ‘https://oldschool.runescape.wiki/w/Rock-shell_gloves?oldid=14264369’
Categories: