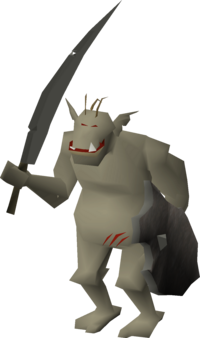 Rock is the strongest troll on Death Plateau, possessing a higher max hit and a significantly faster attack rate than Stick, who spawns next to him. Players must be very cautious when fighting him, as he can hit a max of 31 and has a fair amount of hitpoints. Since he only attacks with melee, Protect from Melee is recommended. Like the other named trolls on the plateau, such as Stick, Pee Hat, and Kraka, he may drop a Rune warhammer or Granite shield.

Since trolls are named after the first thing they try to eat, he probably tried to eat a rock.