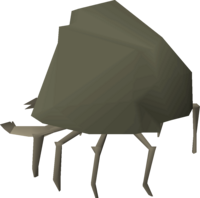 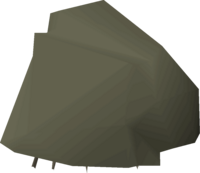 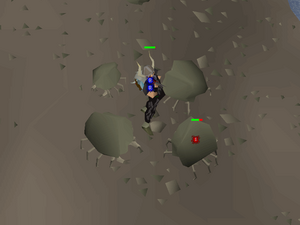 A player in combat with multiple rock crabs.

Rock Crabs are aggressive monsters that look like harmless rocks while disguised, but attack when walked by. Unlike most other enemies and NPCs, Rock Crabs are not marked with yellow dots on the player's minimap; this is probably due to the crabs' appearance, which camouflages them as rocks.

Players can tell if a rock is a Rock Crab by looking at the rock's shape; Rock Crabs are tall oval shaped while normal rocks in their area are mostly in large clusters of shattered pieces. Another way to tell is by right clicking on them. If the text colour is yellow, it is a Rock Crab. If the text is blue, it is just a prop.

Rock Crabs become tolerant if the player has not left the surrounding area in a certain amount of time (roughly between ten and twenty-five minutes). To make the crabs aggressive again, exit the surrounding area (halfway to the entrance to the village in Rellekka, or by entering and exiting the entrance to Keldagrim) and enter again. You can also find one Rock Crab that will be aggressive, kill it then you can continue killing other crabs. As they are "dormant" until "awoken" by a passing player, rock crabs cannot be attacked until they are made aggressive once more.

Rock Crabs are excellent for training at all combat levels due to their low Defence and high Hitpoints, though low level players should consider bringing food, although the more numerous, closer-knit and higher health sand and ammonite crabs have made rock crabs less popular amongst players.