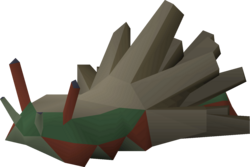 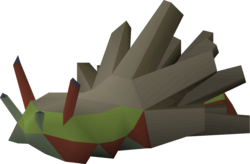 Rockslugs are Slayer monsters that require level 20 Slayer to kill. In order to kill a rockslug, a bag of salt must be used when it has 4 or less Hitpoints. If a bag of salt is used on a rockslug with 5 or more Hitpoints, the bag will be consumed but have no effect. If a rockslug's health is reduced to 1 but a bag of salt is not used on it, the rockslug will stop retaliating and wander off. Players can buy the "Slug salter" perk from a Slayer Master for 80 Slayer points, which will automatically salt the rockslug when it falls below 5 Hitpoints, provided that the player has a bag of salt in their inventory. Alternatively, a brine sabre can be used to kill them without the need for bags of salt.

They are rarely killed due to their mediocre drops, which consists of low level ores and seeds. They may rarely drop the mystic gloves (light).

Drop rates estimated based on 475,942 samples from the Drop Rate Project, unless otherwise cited.

There is a 9/128 chance of rolling the general seed drop table.

There is a 6/128 chance of rolling the gem drop table.