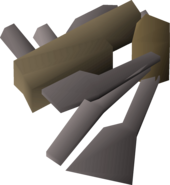 The rogue kit can be obtained as a reward from the Rogues' Den minigame. When used, it can be made into a chisel, rope, tinderbox, or spade. Once used, it cannot be changed back.

There is a 3/8[1] chance of obtaining a Rogue Kit when a player successfully cracks the safe at the end of the Rogues' Den maze.

The main use of this item would be in cases where you're doing something like a quest, where you might not be sure what items you might need, but one of the above items might end up being useful.

One advantage of rogue kits is that they stack in inventory, so a player can carry a large number while only using up one slot. This can be useful for areas where a player needs to use up more than two ropes to get through (so that they only need to use up two inventory slots), or for quests that take place far from banks and require multiple of these items, but also encourage the player to take plenty of food. A specific example would be the Shilo Village quest, where all four items are needed, while you also need to defend yourself against undead ones.