Romeo & Juliet is one of the first quests released in RuneScape, and roughly follows the story of the tragedy of the same name by William Shakespeare.

Romeo can be found in or near Varrock Square. Speak to him, and he asks you to talk to Juliet.

Go and talk to Juliet, located on the 1st floor[UK]2nd floor[US] of the mansion directly west of the Varrock West Bank, just outside the western walls of Varrock, on the top floor balcony. She will give you a letter to give to Romeo. Go back to Romeo at Varrock Square, and deliver the letter. If you cannot find Romeo, he may have wandered inside the general store located south of the square.

Father Lawrence's location.
The location of the Cadava bushes.

Note: You can save some time by having the Cadava berries in your inventory before speaking to the apothecary. Ironman players are recommended to grab some redberries at the same time as the cadava berries, for use in later quests. 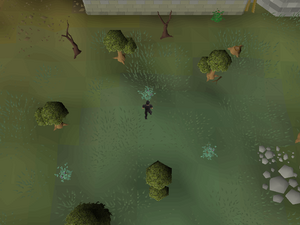 The Cadava bush to pick from for Cadava berries.

The Apothecary can be found in south-western Varrock located west of the Varrock Swordshop, in a building with a purple potion icon. Speak to the Apothecary about the quest, and he will tell you he needs cadava berries, you may need to ask him to talk about something else. Cadava berries can be found on a bush located west of the mine south-east of Varrock. When you have them, return to the Apothecary, and he will give you Cadava potion.

If you want to make multiple Cadava potions, drop the one that's in your inventory and ask for another.

Be careful as drinking the potion yourself would result in temporarily knocking yourself out. 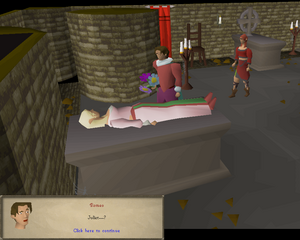 Romeo and Juliet in the crypt.

Now, head back to Juliet, and give her the potion. You will now see a cutscene of her "dying", though she really falls into a coma.

To the crypt[edit | edit source]

Go back to Romeo, and tell him that he must rescue Juliet from the crypt. He needs someone to accompany him, which ends up being you. You will now see another cutscene of you entering the crypt with Romeo. When he sees Juliet's cousin, Phillipa, he forgets all about Juliet and falls in love with her. Congratulations! Quest complete! 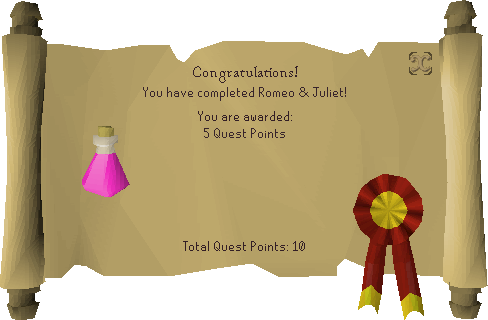 Completion of Romeo & Juliet is required for the following: