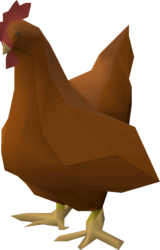 A rooster is a low-level monster that is very similar to a chicken, and indeed they are found together.

Specifically, players can find at least one in Tenzing's yard on Death Plateau. There is also a rooster in the chicken pen in Rellekka and in Miscellania market.

The attackable ones are members-only, but there is a rooster in the farm near Falador standing on the top of the box in the chicken pen even on a free-to-play world. It looks exactly like the Evil Chicken, a former random event and a boss monster in the quest Recipe for Disaster. However, that one cannot be attacked.

Drop rates estimated based on 22,719 kills from the Drop Rate Project, unless otherwise cited.