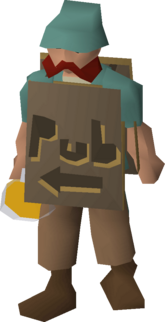 The Rowdy dwarf is one of the many dwarves that inhabit the dwarven capital city of Keldagrim. He can be found near the Laughing Miner Pub on the east side of the city.

The Rowdy dwarf had angered The Red Axe by wearing the wrong coloured cap all the time. He was fired, and since then, has been doing little more than drinking, as dwarves are known to do. He was recently hired by the Laughing Miner Pub as an advertiser. His job consists of walking around outside the pub wearing a sign pointing to the pub. As the barmaid in the inn points out, "He was the cheapest labour we could get."

The Rowdy dwarf also plays a role in Forgettable Tale.... During the quest, the player must convince him to give them one of the seeds required to grow Kelda hops. He will do this only if they bring him a seemingly random item, such as a toy horsey or ashes. He can also do this when a player is not doing the quest, and will reward the player with some coins.