Royal Trouble is a Fremennik quest that takes you to Miscellania. Mysterious robberies threaten to plunge the island into a war with neighbouring Etceteria and, as regent, you are to investigate the occurrences to prevent this from happening. 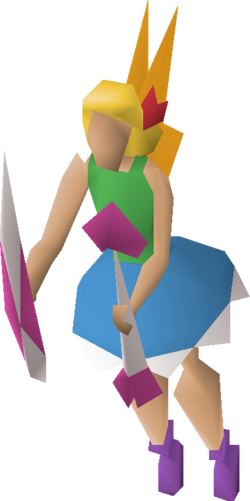 Prince Brand suggests that the player gets Queen Sigrid and King Vargas to marry.

Travel to Miscellania (fairy ring: CIP), and speak to Advisor Ghrim in the castle to start the quest. He'll say that since you took up the position of regent, King Vargas has grown bored and both he and Queen Sigrid have begun threatening each other with another war.

Speak to Prince Brand or Princess Astrid, found in either of the two rooms next to the throne room, and a cutscene will follow. Prince Brand suggests that you convince the King and Queen Sigrid to marry to prevent further catastrophe, which Princess Astrid excitedly agrees upon.

Speak to the King. He'll say that several items from many of Miscellania's citizens have been going missing, and that you should investigate.

Find and speak with either Gunnhild by the herbs, Leif by the trees, Frodi on the dock, or Magnus by the mines (they will all say the same thing, you only need to talk to one of them). Apparently, Etceterian soldiers came to ask for tithes, the workers refused, and the next day items were stolen.

Talk with the King again. He'll send you to discuss this situation with Queen Sigrid.

Speak with Queen Sigrid in Etceteria. She'll tell you to talk to her citizens about things gone missing, criticising the king whenever she gets the chance.

Go to the marketplace (within the Etceteria castle walls) and find Matilda. She will tell you the same story as the workers in Miscellania, only with the roles reversed.

Speak again with Queen Sigrid and update her on the known information. Soldiers have been mentioned in both stories, yet neither side has an army. She'll say this is your responsibility due to your position as regent and demand you solve things.

Note: Be sure to have the things you will need for the fight at this point, utilizing the bank directly north on Etceteria. Remember to take antipoison potions and prayer potions as needed. It is recommended to leave about 10 inventory spaces open for items you're going to use later on during the quest.

To the dungeon with you![edit | edit source] 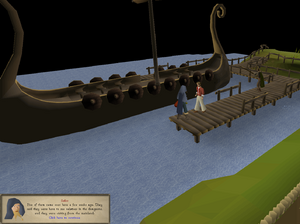 The sailor explains about the island's dungeons and recent visitors.

Go back to Miscellania and speak with King Vargas to review your conversation with the Queen. He'll ask you to speak with Ghrim about the presence of these alleged armies and the missing goods.

Ghrim, assuming these happenings are being caused by outsiders, will suggest you speak with the Sailor at the docks to find out if he's seen any suspicious characters.

Head to the Sailor at the docks of Miscellania. He will mention a group of children who came to the island recently, saying they had gone to go visit their family in the dungeon.

The dungeon is still inaccessible at this point, so speak again with King Vargas to gain access. He'll give you a scroll with his signature.

Take the scroll and enter the dungeon within Miscellania's castle walls (look for the dungeon icon on the minimap), and you will arrive in a small underground settlement. Go to the pub and speak with a dwarf called Donal.

Items required: 9 free inventory spaces, 5 coal (or you can mine the coal from the chamber with a pickaxe you can find near the dwarf miners). 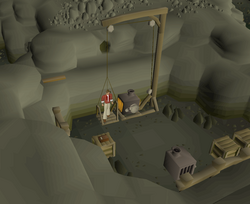 The lift is operational again.

Upon speaking with Donal, he'll talk about a monster deep within the caves. He'll give you a mining prop to get through the passage and into a room with a broken lift.

Head up north, and you will see two dwarf miners. Pick up a pickaxe from the rock if you need one.

Use the mining prop on the crevice and squeeze through it.

Now, you need to repair the lift using items found in the boxes in the chamber:

The lift should be operational now. While making sure you have another rope, click the 'Use-Lift' option on the platform to head closer to the mysteries of the island. (If this option doesn't appear, make sure you have added 5 coal to the engine. You can do it when placed on the engine platform.)

Take the plank and enter the small tunnel on the east wall. Continue travelling east and use a rope with the overhanging rock to swing across the water.

You will come across the remains of a fire, search it to get the first part of a burnt diary. Read the diary, and save it for later.

Use the plank to cross the slippery rocks - otherwise, you may be hit for 8 damage. The plank is not left behind and may be reused every time.

As you proceed further into the caves, you will come across two more fire remains, search them to get the second and third part of the diary. After the third fire remains, there will be some steam vents in the ground. Do not walk across or stand on them as they repeatedly damage you depending on your Hitpoints level.

After the vents, there will be another set of fire remains, search it for the fourth part of the diary. Going further down into the caves, there will be some rocks lying on the cliffs above your path. Do not stand or walk under those rocks as they will fall down on you and deal some damage depending on your Hitpoints level.

After progressing through the area with the rocks, you will come across yet another fire remains. Search it to find the fifth and final page for the diary. Once you have completed the diary, you must read it before being able to enter a crevice at the end of the passage. 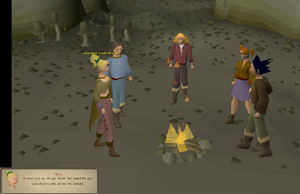 The children discussing what to do.

Enter through the crevice, and you should see a cutscene involving some lost kids. Speak to them to get the full story. The kids had apparently not been able to pass the trials to become a Fremennik, so they were going to start a war here and then stop it, and be seen as heroes. They are to blame for everything.

Travel out through the next exit, and roam the passages where there are lots of sea snakes and snake spawns until you reach another crevice; squeeze through and kill the Giant Sea Snake (level 149). 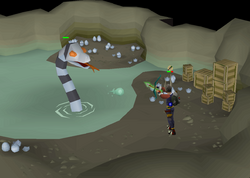 Protect from Melee works fine if you want to run up close. From a distance the snake uses ranged attacks so use Protect from Missiles if ranging or maging. 60 mage, Iban blast, and a small amount of magic bonus will be enough to kill the snake very quickly. A Dwarf multicannon can be setup in the boss room to help lower levels defeat the Giant Sea Snake.

Its poison damage hits 9 so an antipoison is strongly recommended. Note that a superantipoison will also negate any effects for 5 minutes. A player who has around level 70 Ranged, full Black d'hide, a Magic Shortbow (i), and Rune arrows, for example, should only need 1 dose of normal Antipoison to kill the Snake. Similarly, level ~70 Melee stats with a Dragon scimitar should also only need 1 dose of antipoison. After the fight, it is also recommended to immediately drink your antipoison because the damage of the poison is very slow, yet heavy.

At peace once again[edit | edit source]

Pick up the heavy box that the snake drops. If you forget to collect the box before leaving, speak to the guard outside the dungeon on Etceteria.

Return through the crevice. A guard will notice you and help you up, and you will surface near Sigrid's castle.

Go to Queen Sigrid and talk to her. She'll be impressed with you, and she'll give you 20,000 coins as a reward and a letter to take to King Vargas (reading it will not affect the quest).

Talk to King Vargas to give him the letter for the rest of your reward. 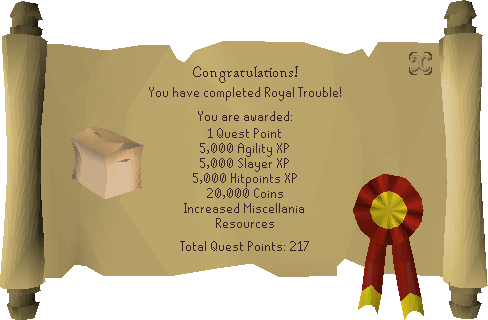