A player whacking another player with a Rubber chicken

A Rubber chicken is a event reward that can be obtained by completing an Easter holiday event, which occurs once per year.

The Rubber chicken can be equipped and has the same attack styles as a warhammer. It gives very large attack penalties and is nearly useless as an actual weapon. As such it is allowed during "fun weapon" fights in the Duel Arena. When wielded, players will see a "Whack" option on all other players. Picking that option will cause the player to hit the other player. The hit is just an animation and no damage is dealt, nor does it count as entering combat. If a player whacks a large number of other players, they may "fumble" the chicken, dropping it to the ground where it must be picked up again and re-equipped.

Players can right click the chicken, either in their Inventory or on the Worn Equipment screen, and select a dance option, making them do the chicken dance emote, which includes a short song. The dance and song could also be accessed by eating one of the event's Easter eggs, however once the event was concluded, this method no longer worked. Players who distract the eyes in the Abyss will sometimes perform the Chicken Dance emote, even if they do not have a Rubber chicken.

A player wielding a Rubber chicken and operating it to do an enhanced dance emote.

Before the 2014 Easter event, it could only be obtained from picking one up from various spawn points around the world during 12–19 August 2013. When picked up by a player, it would immediately spawn in another random location. 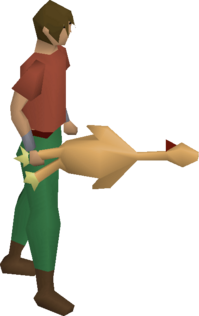