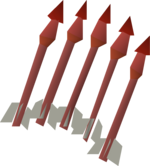 Ruby dragon bolts (e) are ruby dragon bolts that are enchanted via the Enchant Crossbow Bolt (Ruby) spell by a player with level 49 Magic. The spell enchants 10 bolts per cast, and uses 1 cosmic, 1 blood, and 5 fire runes.

For low hitpoint opponents, this effect can be disadvantageous because the effect overrides bolts damage; for example, the effect might only cause 15 damage while a regular hit would cause 30. For this reason, it is often useful to also bring enchanted diamond bolts to use at the end of a fight when ruby bolts cause diminishing returns.

This enchantment is especially effective against opponents with a high number of Hitpoints, such as black dragons. These bolts are most often used in killing bosses, commonly against God Wars Dungeon bosses and Vorkath.