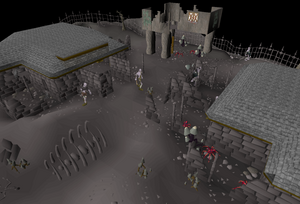 The Eastern Ruins, more commonly referred to simply as the Ruins, are the remains of an ancient settlement in the eastern Wilderness. Little is known of them, and unlike many of the Wilderness' ruins, they cannot be reliably traced back to Zaros's kingdom. They lie in roughly level 25 to 28 multi-combat Wilderness, and as a result it is advised players prepare for possible attacks by player killers.

The Ruins contain several item respawns, as well as a furnace useful for smithing.

The Ruins' history is largely unknown. Unlike many man-made remains found within the Wilderness, they cannot be reached by using Ancient Magicks teleportation, and their original name is unknown.

What little is known of them has largely been gathered by examining the Ruins themselves. They contain a number of small buildings, suggesting the area may have been a small village as opposed to a military establishment. There are some pillars when examined is once part of a temple, suggesting the inhabitants once worshipped a certain god. A number of dilapidated fenced-off areas, food troughs, and what appear to be livestock remains suggest that the area may have once been largely agricultural. Slightly to the north, near an encampment of chaos dwarves, a trough can be found amongst a small tangle of trees, suggesting that the Ruins may have once stretched a considerable distance further north or that their contents have been looted at some point.

Not far to the south, below the Graveyard of Shadows, is a Wilderness Obelisk, which allows players to travel to one of several random Obelisks found at random locations within the Wilderness. This method is unreliable in reaching the Ruins.

On foot, the fastest way to reach the Ruins is by travelling north from Varrock or Edgeville.

The Ruins' most popular attraction is its furnace, which mysteriously still operates. Here players can smelt ore, making it popular amongst those leaving the Hobgoblin Mine in the far north.

Several items will periodically reappear in the Ruins. They can be taken freely.

The Ruins, though safe by Wilderness standards, are nonetheless highly dangerous and play home to several aggressive monsters. Caution should be taken when visiting the area.