From Old School RuneScape Wiki
Jump to navigation Jump to search
This article is about the location. For the music track, see The Ruins of Camdozaal.
The RuneScape Wiki also has an article on: rsw:Camdozaal

The Ruins of Camdozaal is a ruined underground city which was once the home of the Imcando dwarves after the fall of Imcandoria. It is located beneath Ice Mountain, accessed through the ruins entrance on the western side of the mountain after completion of the quest Below Ice Mountain. The ruins are home to the Sacred Forge, which runs on a material called barronite, and powers the entire city.[1]

Led by Yonrith Lovakengj,[5] the Saradominist forces marched upon Lassar and destroyed it in one of many attacks on the Zarosian Empire that began after the Betrayal of Zaros. Once the Zarosian forces have been driven out, the Imcando dwarves set to build their new city, naming it Camdozaal. The city would become the prosperous home of the Imcando until the early Fifth Age, when a faction of Fremenniks sought to destroy any users of magic in the Runecrafting Crusades.

With their inclusion of magic in dwarven smithing techniques,[6] as well as experimentation with golems[7] left over from the Zarosian era,[8] the Fremennik turned their weapons toward Camdozaal. The Imcando dwarves, believing their weapons to be strong enough to repel the invasion, were ultimately wiped out.[9]

Today, Camdozaal is a shadow of its former self, and Ramarno is the only remaining inhabitant of the city,[10] until the rediscovery of the ruins during the events of Below Ice Mountain. Though largely forgotten, there remain traces of Lassar in various areas of the ruins. 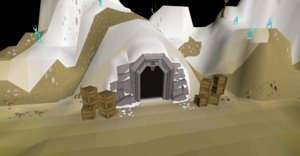 The recently 'excavated' entrance to the city.

Players can get to Camdozaal multiple ways:

Once players have reached Ice Mountain, they can walk west around the mountain (past the entrance to the Dwarven Mine) and then north until they reach the entrance.

There is a bank chest in the centre of these ruins which is located East of Ramarno's location.

The Camdozaal Mines contain 18 Barronite rocks that yield barronite shards with a chance to receive a barronite deposits, gems, or clue geodes. Bronze pickaxes are obtainable from the barrels near Ramarno, next to the bank deposit box, and those on each side of the bridge in the mining area.

Next to Ramarno and the sacred forge there is a regular anvil, as well as a special anvil called the Barronite Crusher, which is used to crush barronite deposits. Doing so gives a rare chance to find the barronite head, as well as ancient relics and the Imcando hammer. 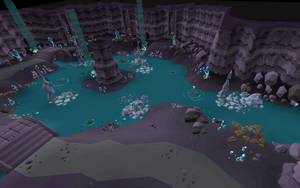 The icy subterranean waters of Camdozaal.

There is a small fishing net spawn near the fishing spots should the player need it.

Types of fish that can be caught here include: 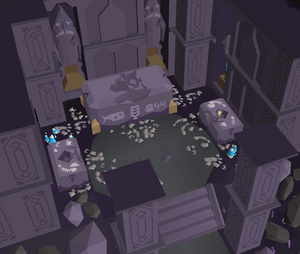 The ritual altar and preparation tables.

The fish must be prepared before they can be offered. Doing so requires the same cooking level as the fishing level required to catch each fish, at one of the preparation tables whilst having a knife in the inventory. These fish cannot be cooked or eaten. Members can also catch cave eels and slimy eels here, which cannot be prepared or offered to the altar, though they can be cooked for use as food.

In the southeast section of the ruins, several golems can be found that drop Runecrafting cores and the barronite guard.

There is an area called the Camdozaal Vault, where for a cost of 750 barronite shards, players run through a maze-like structure for 60 seconds to obtain special items. 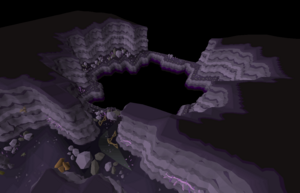 The pit just beyond the barronite mine.

When walking onto the northernmost tile near the large pit north of the Camdozaal Mines, there is a small chance for a message to appear in the chat box of a "Strange Voice" saying Come... Come... Come... Down into the depths... Come.... It is unknown what the purpose of this text is, if any. In a Postbag from the Hedge, a letter was addressed to this pit and Postie Pete transcribed its whispers as 'Here... In the inky depths... We languish in sorrow... Come... Come... Join our choir of shadow... Come...'[11] 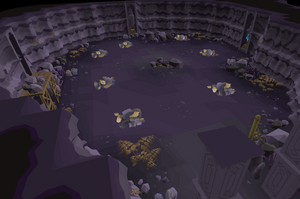 Within the Ruins, players can find several item spawns that are appropriate to the activities found within: