The Ruins of Unkah are ancient ruins in the Kharidian Desert. A group of fishermen from Al Kharid, the Spirit Anglers, have set up camp here to investigate the nearby Tempoross Cove, where the sea spirit Tempoross resides. A small mine is located atop a cliff north of the ruins.

The Ruins of Unkah can be reached from Al Kharid by boarding Ferryman Sathwood's ferry. If entering from the desert, the player must go through either of the Shantay Passes located on the southern and eastern borders of the ruins. 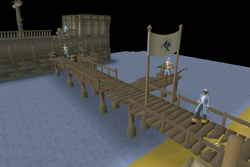 The Sea Spirit Dock west of the ruins.

The Sea Spirit Dock is where players arrive if travelling via Al Kharid. Here, players can board the docked ship via a rope ladder, where they are taken to Tempoross Cove to help subdue Tempoross, an ancient sea spirit.

A bank chest, deposit box and poll booth are found in a ruined building south of the entrance of the Sea Spirit Dock.

In the area beyond the southern Shantay Pass:

In the area beyond the southern Shantay Pass: