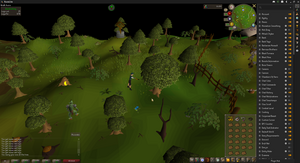 A player using the RuneLite client.

RuneLite is an open-source third party client for Old School RuneScape, written in Java. The client features several quality-of-life improvements over the official game client, and has an extensive API which can be used by developers to create plugins. It is one of three non-Jagex clients on the Approved Client List that players are permitted to use, along with HDOS and OSBuddy.

Development on RuneLite began in 2014,[1] with an initial version being released in May 2016.[2] As RuneLite is open source, it has allowed community developers to contribute their own plugins and improvements to the client over many years, as opposed to the closed source development of the official game client.

In 2018, Jagex approached the main RuneLite developers regarding alleged copyright infringement, requesting that the client be taken down by the end of the week commencing 14 May.[3] On 16 May, Jagex published a news post about RuneLite,[4] stating:

An update to the news post later that day stated that Jagex had temporarily paused legal action against RuneLite after the developers agreed to make parts of the RuneLite client, specifically those relevant to de-obfuscating the RuneScape client code, closed-source.

On 30 September 2019, Jagex published another news post regarding third party clients, outlining the features within a third party client that would be unacceptable and could result in a player being banned from RuneScape.[5] On 8 November, Jagex confirmed that RuneLite fully complies with the rules outlined in their previous post.[6]

On 2 March 2022, as part of the cooperation of Jagex and RuneLite, a link to the official RuneLite website was added on the Old School RuneScape website homepage, particularly to prevent phishing attempts by fake RuneLite websites.[7]

RuneLite has many features that are not part of the official game client. These include, but are not limited to:[8]

RuneLite boasts a Plugin Hub which acts as a directory of plugins that are maintained by third party developers and verified to be within RuneScape's rules by RuneLite's developers. Plugins can be installed from the hub via the client. Popular plugins include a quest helper, a UI depicting Zulrah rotations, and a plugin to track coins earned by in-game flipping. 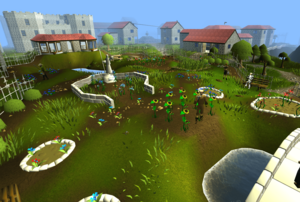 The HD plugin in RuneLite.

The 117 HD plugin for RuneLite was created by a user named 117Scape. The aim of the plugin is to alter the graphics and textures of Old School RuneScape by making them high-definition, while remaining faithful to the vanilla textures. The plugin was built over the course of two years and approximately 2,000 hours of work, and was originally scheduled to be made available on 6 September 2021. Jagex reached out to the developer of the plugin to inform them that they were working on their own graphical improvement project which was "relatively early in the exploration stages" and requested that the plugin's release be cancelled.[9]

After outcry from players, Jagex opened up discussions with the developer of the plugin and the RuneLite team to come up with a solution which would allow the plugin to be made available. On 10 September, it was announced that the plugin would be released on the following Monday, 13 September, through RuneLite's Plugin Hub, after an agreement was reached between all parties.[11]