From Old School RuneScape Wiki
Jump to navigation Jump to search
The RuneScape Wiki also has an article on: rsw:RuneScape - The Official Handbook

RuneScape: The Official Handbook is a book written by children's author Tracey West, best known for her work on several Pokémon books in the early to mid 2000's. The handbook, along with the three novels (Betrayal at Falador, Return to Canifis, and Legacy of Blood) written by T. S. Church, are currently the only printed RuneScape sources endorsed by Jagex. The book covers most of the free-to-play parts of RuneScape, and also gives tips for newer players.

Since the book was printed in 2006 or 2007 (the exact month and year is disputed[1][2]), it does not reflect the updates since then, and as such has outdated information and graphics, such as the Party Room being shown in its former location in Seers' Village.

The book is a ninety-six page long full colour paperback publication which covers some basic information about the Free-to-play section of RuneScape 2 circa May 2006[3]. As these books were published by Scholastic Inc., they were primarily distributed to children at local school's book fairs, a business model famously adopted by the company.[4] 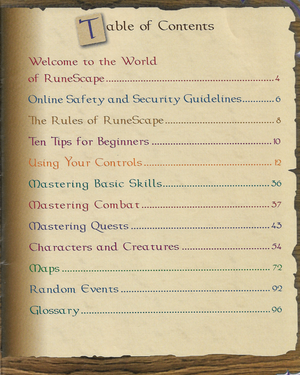 The book is organised into twelve unnumbered chapters. Interestingly enough, the table of contents at the front of the book lists the wrong page number for the "Mastering Basic Skills" chapter. Below is a table which briefly summaries the contents of each chapter. 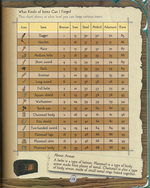 The bronze "hatchet" being displayed as a halberd is one of the book's many inaccuracies.