RuneScape 2 was the name given to RuneScape when Jagex released a beta version of what is now known as RuneScape, on 1 December 2003 (RuneScape 2 Beta is Here!). The working name was RuneScape 3D., to distinguish it from what is now known as RuneScape Classic, which used 2D graphics for several entities. The finished version was launched on 29 March 2004 (RS2 Launched!). It is one of the largest updates since the game's initial launch. It saw the introduction of a more powerful game engine, three-dimensional graphics, a new combat system, improved sound including the addition of music, and many other new features.

Compared with its predecessor, this three-dimensional version featured a vast improvement to the game engine as well as improving on the sound and interfaces. The core engine allowed Jagex to expand the game to levels previously not possible.

Jagex first announced the upcoming release of a "much faster 3D engine" in an update on 11 June 2002. Over time, Jagex released graphical previews as well as progress reports and other information about the many future changes.

The project was first referred to as "RuneScape 2" in an October 2003 news post (it was previously known as the "big 3D update" or the "new game engine").[3] It was also revealed that the beta would become available on 1 December.

Jagex originally did not want to create a Halloween event for 2003, because they feared it would delay the planned release date of the beta. In one of their polls, they asked players if they would want a new Halloween event but also delay the release of RuneScape 2 Beta, or keep it on schedule and have a "pancake day" in February instead. 78% of voters wanted a 2003 Halloween event. However, RuneScape 2 was still released on schedule, because the developers came in early and on weekends to do extra work.[4]

The new combat system was explained in detail in a 24 November newspost.[5] 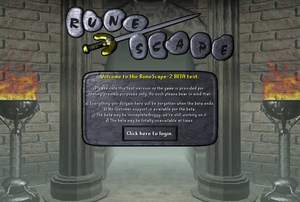 All members had access to the first phase of RS2 Beta. Their characters and skills were copied over from the stable build of RuneScape, but their items and quest history were not. This was deliberate, as Jagex wanted players to test all of their content. Initially, only the free-to-play area was available with new areas and quests released gradually over the beta period. The Lumbridge Teleport spell was also deliberately broken so that it could be cast without runes even at level 1 Magic. This allowed players to escape to a safe area in the event they found themselves trapped by a glitch.

The second phase of Beta began on 3 March 2004. Players again had their characters copied over from the stable build of RuneScape (including items and quest status this time). The Lumbridge Teleport spell also had its level requirement and rune cost reinstated.

On 17 March, the final phase began. Characters were once again copied over from the stable build of RuneScape. For this stage of testing, free players were given access to Beta as well as members.

RuneScape 2 was launched on 29 March 2004.[6] Players' stats and quest history were copied over to RS2, which became known only as RuneScape to reflect its status as the main game, one last time. Several RuneScape 1 servers were also left online, and it was officially named "RuneScape Classic". Players were given the choice as to which game they wanted their items to be transferred to. Afterward, they became completely independent of each other (aside from sharing login information and the friends list).

The final piece of content, the Underground Pass quest, was added to RS2 on 15 April.[7]

RuneScape 2 dramatically impacted the gameplay experience. Some of the changes and additions include: