The RuneScape Forums, also known as the RuneScape Official Forums or RSOF, are a part of the RuneScape website that allows players to communicate with each other. All members and non-members with a total level of 350 or above can post on the forums.[1]

The forums are bound by their own set of rules, called the Code of Conduct, which "details exactly what is and is not acceptable behaviour within the Jagex Forums."[2]

The RuneScape forums are large. In 2013 the total percentage of players using the forums in comparison to active accounts was 7%. This small list provide links to the commonly used forum sections:

General - For any RuneScape topic not covered by the other forums

Teamwork - Team up with other players for activities

Each forum section can hold up to 50 pages of threads at 20 threads per page for a total of 1000 threads. A thread can be created using the "New thread" link. After a thread is created, the author can bump one of their threads every 10 minutes, using the "Bump" link at each of their own thread. 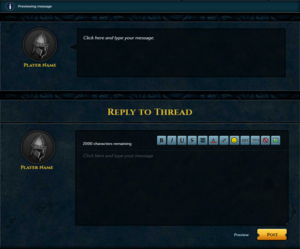 Composing and previewing a message

Each thread which is not locked contains a "Reply" link. Clicking on the link directs to a page, from which a new reply can be composed. Each reply can hold a maximum of 2000 characters.

Before posting a reply, it's possible to preview the text using the "Preview" button.

It's possible for a player to edit their own posts using the "Edit" link on each of their own forum posts.

Mod Stevew hinting on the quote feature for players

Previously, quoting and formatting abilities were features that were exclusive to Jagex Moderators. As of March 2013, these features became available to all forum users.

Players are able to upload images into the forums via Imgur, an image-sharing website. This feature was released on 21 July 2016.

Players are entitled to a signature that appears on every post they make in the forums. It has a maximum of 300 characters.

The search page with Advanced Options

The Search feature can be used to search for a thread at the RuneScape forum through the titles.

It is possible to adjust search options at the "Advanced search options". E.g. to limit the search query to a specific forum section.

Almost every page at the forum contains a black textbox at the left upper corner of the page. Paste the Quick Find Code inside that box and click at the search button to visit the thread. 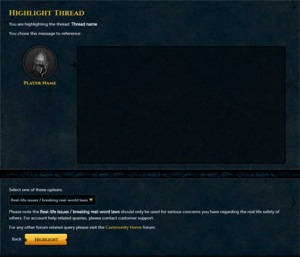 The RuneScape forum is looked after by Forum and Jagex Moderators (otherwise known as FMods and JMods). They have the ability to move, lock and hide threads. They can also change the title of the thread. Jagex and Forum moderators also have the ability to give a thread the Sticky status, which pins a thread at the top of a forum board. Jagex Moderator can also change the contents of any players post, whereas Forum Moderators cannot.

Normal forum users can report accidents by pressing the 'highlight' button below a user's post in a thread and then selecting the category of the offence. For less important issues, such as a title change request, players can use the Forum Help thread.

Sometimes during maintenance or because the browser can't reach the server, an error message may appear saying: "The Forums are temporary unavailable. The forums should be online again in 5 to 10 minutes." This can usually be fixed by reloading or refreshing the page.

The Specialist Forums consist of several specialised, hidden forums with restricted access. They are visible only to players who have been granted access and are logged into the RuneScape website. There are several types of specialist forums:

Players who have level 99 in all skills can request access to the high level forums (HLF), in which only they can read and write. In these forums, restrictions on links and images are lifted, so that the maxed players are able to communicate freely with each other and Jagex staff.

There are maxed-player versions of the General and Off-topic forums. There used to be a section for recent updates and game feedback, but they were later removed.

In order to gain access to the high level forums, a player must post in the High Level Forums - Get Access thread in the Community Home section with their title set to "Maxed" or "The Completionist". Their post will be hidden after a Jagex Mod verifies whether the player has the required levels and grants them access to the forums. Once a player gains access to the High Level Forums, they will retain it even if they don't reach level 99 in future skills when they are released.

The clan leader forums (CLF) are accessible only to leaders of RuneScape clans which have at least 50 members and have existed for a minimum of six months. Two representatives per clan may be have access to the CLF at any one time.

The VIP Video Program forum is accessible to players who livestream RuneScape through Twitch or Youtube and email their details about their channel on either platform to Jagex. It was previously known as Video Club in 2013. This section was removed on 3 December 2018.[3]

The Fansite Staff Forum was accessible only to administrators and administrator approved members of Jagex approved fansites (bronze tier and above). There was no set limit to the number of representatives that can access the Fansite Staff Forum. It was removed on 3 December 2018 along with the High Level - Feedback and VIP Video Program sub forums.

Spam has become a constant problem in the RuneScape forums, most notably in the Suggestions and Rants forums.

The Compliments forum has also been the subject of some criticism, even by members of Jagex staff. The reasons for this vary depending on the status of the user but generally focus on posters rarely producing anything helpful for Jagex or the community. Some members of Jagex have also stated the content of this forum is distasteful for the same reason. It was removed in 2008 but it returned in 2009. Since then, the same problems have in many ways resurfaced, and many players are pushing for Compliments and Rants to be removed.[confirmation needed]

On 15 August 2010, Mod Mark H made a sticky in the Rants forum to try and stop spam and/or trolling, and later Mod Chrisso replaced it with another sticky which elaborated on the rules. Even though it hasn't completely stopped spam, trolling, or flaming, players believe that it has been somewhat effective.

On 16 June 2011, it was announced that the Rants forum would be removed within three days. This led to many upset players spamming the compliments forum, ending in many forum bans and/or mutes. The community of rants joined together in game, starting in Mudskipper Point, then Varrock, then finally Draynor Village, and rioted about Jagex's action.

On 3 November 2011, the Rants forum returned as a "hidden" forum. This means that it is only viewable when logged into the site and invisible when not.

As of 30 April 2015, players can be rated with ranks and badges based on their total forum postcount. The badges can be seen from a dropdown by placing the cursor just under the player's name. The badges are cosmetic and do not unlock increased benefits or features.