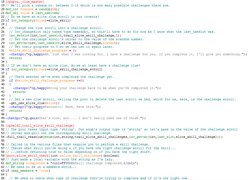 An excerpt of RuneScript code that is responsible for handling interaction of master clue NPCs.

RuneScript is a scripting language that Jagex uses to create content for RuneScape. The game engine is not written in RuneScript, but instead Java. RuneScript was developed by Jagex Ltd. to allow their other staff that do not know Java to add and edit content for the game. The game engine cannot read the RuneScript source files directly, they first need to be translated into a more computer-friendly form known as bytecode.

The minor updates are usually for introducing a new map and adding new NPCs, and for these updates, a RuneScript file is added into the program. The major updates are for the source code, which is usually for making large changes such as introducing new areas in RuneScape, new skills, or for bug fixes.

The syntax of RuneScript is very simple and meant to be understandable by people who are not very familiar with programming.

A script or a configuration can be declared using the brackets (example: [declaration_name])

Triggers indicate when a script will be called by the game engine. In-order to add a trigger to a script, it has to be append at the start of the declaration name followed by a comma (example: [trigger,declaration_name]).

Below is a list of the most common triggers:

There are three kind of variables in RuneScript:

Commands are subroutines that are defined in the game engine, which don't need any special operator to call them for example `map_members` is a command.

Subroutines are scripts that are defined in RuneScript, they can be called by either one of the four:

Below is a list of the common commands that are used by the drop table scripts:

Below is a list of the common subroutines that are used by the drop table scripts: