The rune crossbow is a crossbow that is stronger than the adamant crossbow but weaker than the dragon crossbow. It requires a Ranged level of 61 to wield, and can fire up to and including runite bolts. It is one handed so it can be equipped alongside a shield or god book, a great advantage for player killing, as well as when fighting monsters such as dragons which require an anti-dragon shield. It has an attack range of 7 increased to 9 with longrange.

A common method for Ironmen to obtain a rune crossbow without the requirements to create one is by defeating the Crazy archaeologist. The rune crossbow is commonly used among low level and Ironman accounts to complete the TzHaar Fight Cave due to its high accuracy, low price or ease of access, as well as its very cheap ammunition. 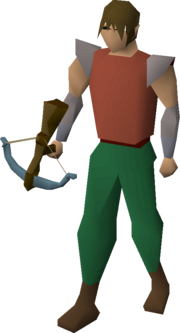