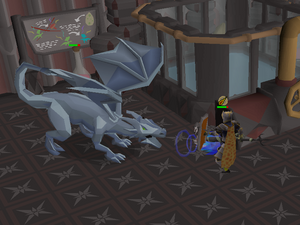 A player fights a rune dragon in the Lithkren Vault.

After completion of Dragon Slayer II, Rune dragons are accessible in the Lithkren Vault and can be fought. They are the strongest metal dragons, so caution should be exercised at all times.

Rune dragons use standard dragonfire, multiple attacks during battle and attack from all sides of the combat triangle, similar to their mithril and adamant counterparts. They also have two unique special attacks:

With base 90 Melee stats and a Ghrazi rapier or Dragon hunter lance, using melee against rune dragons is a reliable option. With worse weapons magic or ranged may be more effective. Rune Dragons have accurate and strong attacks, so Bandos, Justiciar or Barrows equipment is recommended along with Protect from Magic and Piety in tandem to reduce damage taken. Also, Vengeance can be used for dealing with their healing Ranged attacks. As soon as a number appears in a purple hitsplat on the dragon, prepare Vengeance.

With level 90 Ranged and a dragon hunter crossbow, rune dragons can easily be killed due to the crossbow's passive effect, as well as circumventing their melee attack. Armadyl or Karil's equipment is recommended along with Protect from Missiles and Rigour or Eagle Eye in tandem. Also, Vengeance could be used for dealing with their healing Ranged attacks, which hits through Protect from Missiles. As soon as a number appears in a purple hitsplat on the dragon, prepare Vengeance.

Rune dragons have relatively low magic defence. While this method is not as effective as using dragonbane weaponry, such as the dragon hunter lance or the dragon hunter crossbow, people who can either not afford such items, or cannot easily obtain them because they are playing on an ironman, Magic can be a viable alternative, especially on a slayer task.