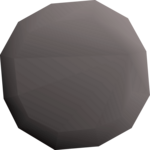 Rune essence is a raw material used in the Runecraft skill that can be crafted into low-level runes, namely air, mind, water, earth, fire, and body runes. Unlike runes, rune essence does not stack. Players need pure essence to craft any other type of rune, which can only be mined in members worlds.

There are a few ways of obtaining rune essence, other than by trading with other players.

Free players may mine rune essence in the rune essence mine, unlocked after completing the Rune Mysteries quest. To reach these mines, players need to be teleported by one of several NPCs. In members worlds, players will also mine Rune essence until reaching level 30 Mining when they will automatically mine pure essence. Mining from one of the rocks that have an unlimited supply of essence gives 5 Mining experience per essence. Pickaxes are needed, just like any other mining activity.