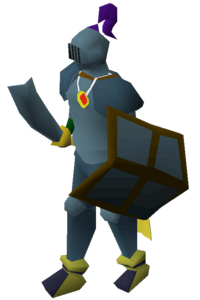 A rune pure is a type of mid level free-to-play combat pure account with defence level trained up to 40 in addition to other combat skills.

At 40 defence level, rune pures have access to the rune armour and green d'hide body. Since they can also wear gold decorative boots, rune pures can achieve the highest maximum hits with all combat styles and all free-to-play melee weapons.

up to 40 to be able to wear rune armour, as well as

attack up to 40 to gain access to the rune weapons. The attack level can be further increased up to 49 without affecting the overall combat level when 99 ranged level is reached.

On low combat levels, these pures might choose not to train attack, and rely on the rune warhammer insteead as the melee switch weapon since it only has a strength requirement. See the variants section for more details.

The gold decorative boots also give them a slight edge in terms of offence over accounts with a defence level under 30 thanks to their unique strength bonus. However, keep in mind that they will be broken upon death in player-versus-player combat and will require 5,000 coins to repair. Additionally, they will be lost upon death beyond the 20 level of the wilderness.

Although it has much lower defensive bonuses than the rune full helm, a rune med helm might also be considered due to its lower price and the lack of ranged accuracy penalty. A coif can also be used to maximize the ranged accuracy bonus.

Every few strength levels the amulet of power will allow to achieve the same max hits on top of its accuracy and defence bonuses, but it will require more frequent strength potion dosage to maintain the maximized damage. This is especially relevant for this gear variant, as amulet of power improves the damage output of both ranged and melee attack as opposed to amulet of strength that works only on melee.

Rune pures will usually use a maple shortbow in addition to a knockout weapon such as a rune battleaxe or a rune 2h sword, as well as an optional rune scimitar as a secondary melee weapon for quicker combos. Rune battleaxe might be preferred over rune 2h sword to due to its shorter attack delay.

God armour pieces can be used in place of regular rune items for their prayer bonuses.

Rune battleaxe might be preferred over rune 2h sword to keep the shield on at all times and for its shorter attack delay. Every few strength levels the amulet of power will allow to achieve the same max hits on top of its accuracy and defence bonuses, but it will require more frequent strength potion dosage to maintain the maximized damage.

God armours can be used in place of the regular rune armour for their prayer bonuses.

No honour and multicombat[edit | edit source]

These setups are meant for the areas beyond the 20 level of the wilderness, where no honour fights are common and utility spells like Snare and Tele Block are widely used.

A complete magic switch is not necessary, but it will significantly improve the accuracy of spells like Snare and Tele Block, especially against opponents in leather armour. It is also useful when using Fire Blasts against armoured opponents.

It is crucial to finish the Dragon Slayer I quest with no higher than 33 defence level due to its experience reward. Otherwise the account might go over the 40 defence, gaining extra combat levels without a significant advantage in combat.

While their higher defence level allows rune pures to train melee skills on NPCs more effectively than classic 1 defence pures, methods involving alts are still among the fastest on the free-to-play worlds.

Depending on the used combat styles, rune pures can employ the same techniques as ranged-melee hybrids or melee pures respectively. However, due to their defensive capabilities, they can employ riskier tactics and perform unexpected combos even with relatively low number of hitpoints left.

1 prayer level is pretty common among rune pures that want to stay in combat level range of regular 1 defence pures. Note that even though they do not have access to any strength prayers, their offensive capabilities are still improved thanks to the gold decorative boots. When wearing the boots at 99 strength level, the maximum hits with rune scimitar and rune 2h sword are increased to 23 and 28 respectively with a strength potion, as opposed to 22 and 27 achievable by accounts below 30 defence level and 4 prayer level.

13 and 31 prayer levels are also common, since they both unlock strength boosts with significant effect on the maximum hits. 44 level additionally unlocks the best free-to-play ranged boost and all of the protection prayers, which are extremely useful in the deep wilderness.

Adamant pure is a similar account build with 30 defence level. This allows them to wear adamant armour and decorative armour including the gold decorative boots necessary to maximize melee damage in free-to-play worlds.

Strength tanks are a variant of strength pures. They do not train attack and instead focus on strength with access to weapons such as event rpg and rune warhammer. In contrary to classic strength pures, strength tanks also train defence to a higher level to gain access to the gold decorative boots and rune armour to make up for their low accuracy. Lack of attack and lower ranged levels allow them to stay in the combat level range of 1 defence pures.

The void pure and berserker builds can be thought of as the members equivalents of the rune pure with similar defence levels. When planning on participating in members player-versus-player combat, consider following their training guides with a particular focus on the recommended quests that award defence experience. To avoid going over the 40 defence level while still having the option to expand the account into members builds, the defence levels can be gained by finishing a portion of the recommended quests like Monkey Madness I and Dragon Slayer I instead of training defence in combat.

Maxed rune pures can be used for most player-versus-player activities and are considered a very good build, similarly to maxed 1 defence pures. They can still be converted to tanks by training defence, or mains by unrestricting all of the combat skills, but in general they are an excellent build that balances offensive and defensive capabilities very well.